The third and final Trithemis species known in Thailand is Trithemis festiva. A very common dragonfly that you will see at many places around Thailand, especially at rivers.

The male
I have spotted the male on numerous occasions at rivers all over Thailand. It loves big boulders and rocks and is extremely common. It is east to spot with its pruinosed blue thorax and set of yellow "triangle" marks on the abdomen. 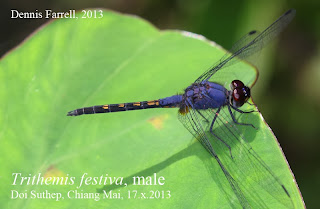 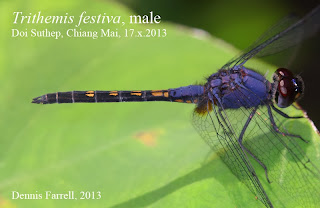 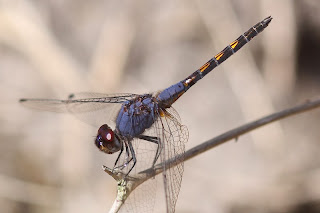 The sub-adult male
I have seem many males of this species, but when I recently visited Phu Kradeung National Park, I spotted this specimen. I presume it is a sub-adult male, but it is the only one I have ever seen. It was also about 300-400 metres away from any known water source. I'm pretty confident this is the correct ID. 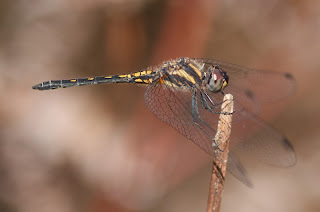 The female...
Well, it has taken me seven years, but I have finally managed to capture a photo of the female. The males of this species are extremely common, but the females hardly ever show. They must be as common, just they hide away until they wish to copulate. I did spot an ovipositing female around four years ago, but the shot was terrible. This time I managed to capture it. I was extremely happy to see this. 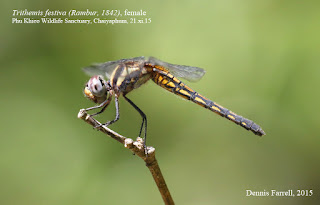 Posted by Dennis Farrell at 1:03 AM