One of the biggest damselflies I have come across, is Megalestes kurahashii. Although it is big, it is very difficult to spot. Mainly because it likes darkened areas and has excellent camouflage. I saw a few females, when I visited Doi Inthanon, Chiang Mai, in April 2010.

The male
I only saw one male when I visited Doi Inthanon. It was hanging around the edge of the large lake near the headquarters. It has fantastic metallic green and yellow markings to the thorax and a virtually green abdomen, only the caudal appendages are whitish in colour. 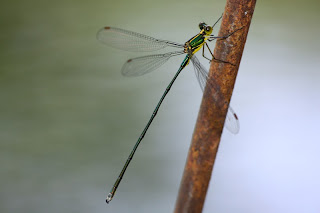 Here, he was almost blown off his perch by a strong gust of wind. 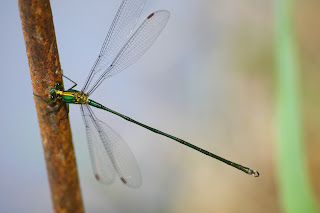 The female
The female is almost identical to the male, except the markings differ slightly along the thorax and the abdomen is slightly more robust. Also the end segments are rather chunky (2nd photos shows it up very well indeed). 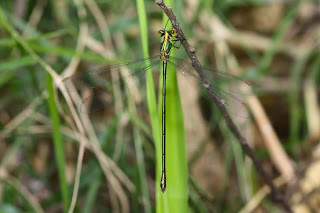 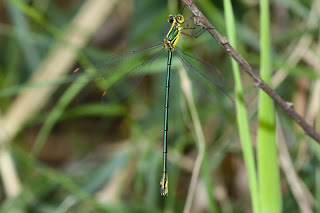 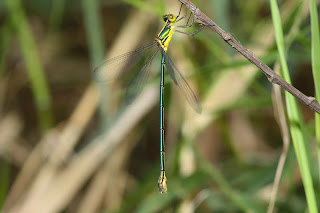 I have only seen this species at Doi Inthanon in April. They were not common, but I did manage to spot 2 females and 1 male. The females were at the small river just outside the headquarters and the male was at the large lake near the headquarters. Both places are close together and I imagine that they oviposit in the river and not the lake. If you look for them, you really have to look hard!
Posted by Dennis Farrell at 11:58 PM