A new provincial record!!! Probably my first too. When I visited Nam Nao National Park, Petchabun, in October 2010, I made a quick visit to the helicopter pad just outside the National Park. It's a large lake and there are many great species there. Just as I was about to leave I saw a large brown dragonfly about 50 metres away from the lake in the tall grasses. I moved closer and saw the thoracic markings. A new species. I was so happy. I managed to get a few photos of it before it flew away. I sent the photos to Noppadon Makbun and he said it was a female Anaciaeschna jaspidea and he was surprised to learn that there was a specimen there... so a new provincial record.


The female
The female is large and predominately brown in colour on both the thorax and the abdomen. However, the easy way to identify this species, is the yellow thoracic stripes, which are highly prominent, as well as the markings along the abdomen. The end segments are white/brown and the caudal appendages are large and black. 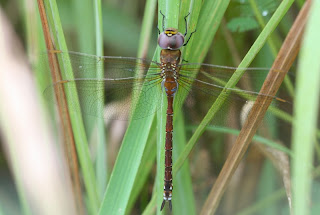 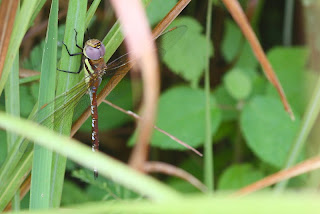 Posted by Dennis Farrell at 2:12 AM