This species probably is one of, if not the most, common species of dragonfly in Khon Kaen. At certain times of the year these things are everywhere. I am talking, of course, about Diplacodes trivialis. This really is the species that got me interested in odonata in the first place. There were three of them once in my back garden and I sat and watched them pick off small insects. It was amazing to watch. So common, yet so difficult to photograph well.

The male
The male starts off yellow and looks identical to the female. But as it matures it becomes a powdery blue colour (see below). Segments 9-10 are black and the caudal appendages are white. It is easy to identify and they like to stick closely to the ground, making photography difficult. They are also extremely skittish and will often fly away at the slightest movement. 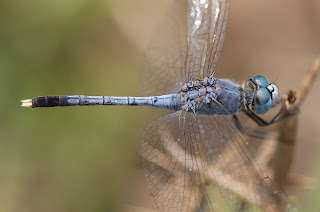 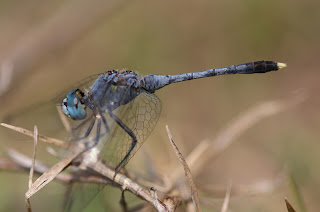 Here is the male in the typical obelisk position 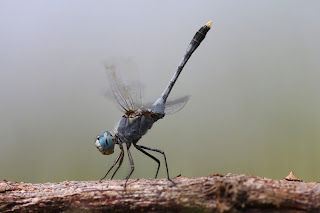 The mid-stage male
Here is a sub-adult male that is half-yellow, half-blue. It will eventually turn the same colour as the above specimen. 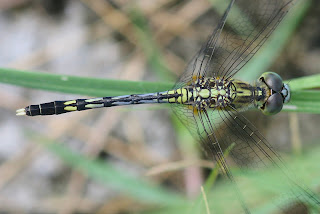 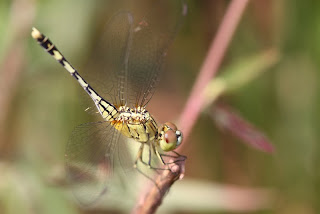 The teneral female
One morning at a large exposed pond in Khao Yai NP, there were literally hundreds of teneral females that had just emerged. It was really strange as they all seemed to be females. They looked amazing, with their 'fresh' wings glistening in the early morning sunshine. 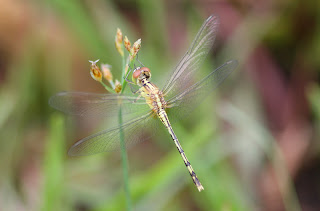 Here is a specimen caught in a cobweb. It shows just how much those 'fresh' wings glisten. 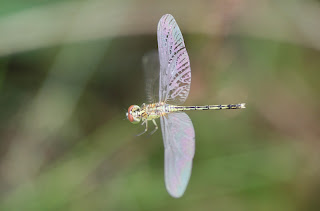 Eye'll be watching you...
Sorry, that was a terrible pun. This is a really good close up of the female's head. It shows just how amazing they are to look at. I took this photo about 2 1/2 years ago ad I really fell in love with macro work after this (This photo is the same as my photo at the top of the screen). 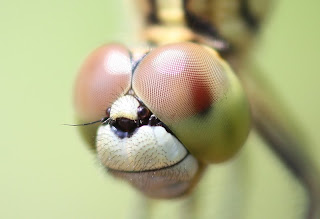 The more gruesome side of dragonflies...
This female, which incidentally was resting on my hand, was munching away on a small damselfly. However, I can't really tell where the mouth starts and the damselfly ends... 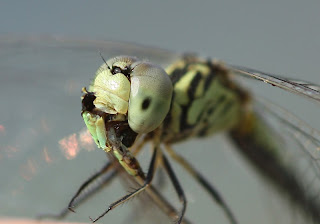 If you want to see this dragonfly, simply go to a body of water and you're sure to find some.
Posted by Dennis Farrell at 4:46 AM