Look up on a hot day and you'll probably see this species! In the paddy fields around Khon Kaen, one of the most common dragonflies to be seen flying around above you is Pantala flavescens. At certain times of the year they come out in their droves and swarms of them can be seen. You can even see them all over the city centre, especially on hot dry afternoons. This species even reaches the UK... hence its nicknames!

The male
The male is a medium sized dragonfly and has a light golden brown thorax and the abdomen is deep yellow at the base and more of a burnt orange dorsally. There is a broken middorsal line which becomes more prominent at S7-9. The caudal appendages are black. 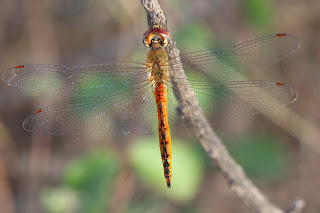 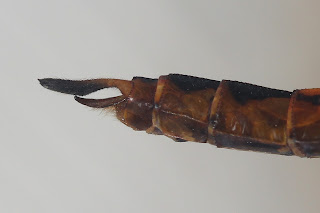 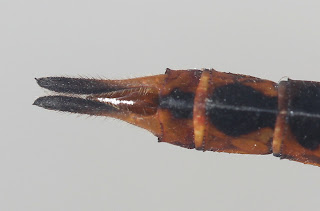 Male caudal appendages, dorsal view (this specimen's appendages are much shorter than the above - no idea why, but they seem to vary in length) 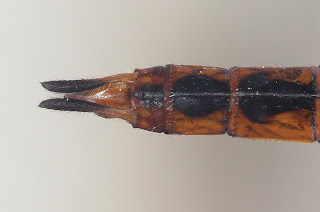 A typical view...
Hundreds of them can be seen hovering like this right above your head, wherever you are.


The female
The female is similar to the male, except the thorax is very pale yellow and the abdomen is a deeper yellow. The base of the wings is also yellow and the base of S-1 is white. The most obvious difference between male and female is the wings - the female wings have a brown tinge, whereas the male's wings are clear (see below). 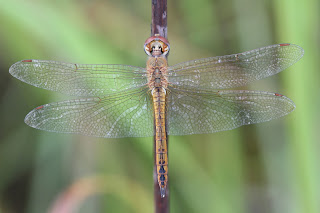 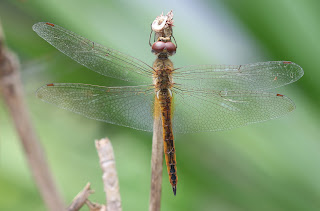 The female (lateral view)
The lateral view, which highlights the base of the abdomen at S-1 and shows just how similar it is to the male.

Close-up...
This is a close-up of the above female. 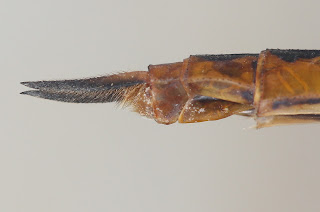 Female caudal appendages, dorsal view (very similar to that of the male) 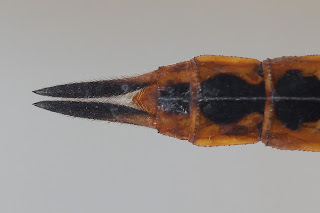 Male vs female
Both males and females are almost identical. Obviously the appendages differ (but only just). The easiest way to tell them apart is through the wings. The female's wings have a brown tinge to them, whereas the male's wings are clear. 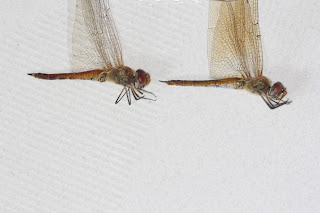 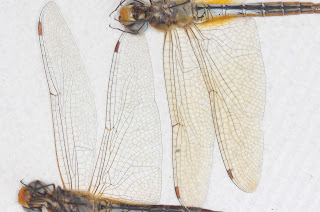 If you want to see this species, simply look up on hot days, especially after heavy rain. Alternatively, pick dead ones up off the roadside ... recently, there were literally hundreds on the road, all hit by cars as they attempted to do battle in the skies along paddy fields in Khon Kaen. Here's just a small collection of those I picked up ... 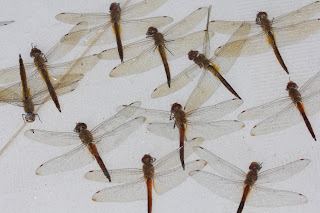 ... and if you'd been following, you would easily spot that the specimens at the top are female (brown wings) and those at the bottom, male. (clear)

Posted by Dennis Farrell at 6:30 AM