By far the most common Orthetrum species I have seen and one I tend to see everywhere is Orthetrum sabina sabina. Everywhere in the lowlands, you can spot this species. Often you will hear it first as it makes a rather loud 'clacking' sound as it takes off. This is the fifth dragonfly species from the Orthetrum genus.

The male
The male is as common as the female and can be seen in equal numbers. The thorax is green with black stripes and the abdomen has distinctive black and white markings. 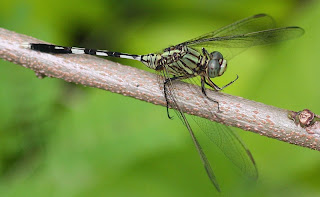 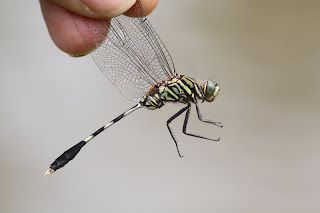 The sub-adult male
The young male is very similar to the adult male, yet is more of a brown colour. 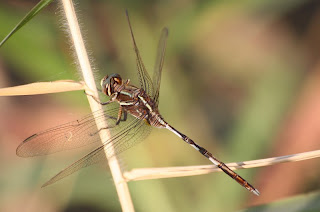 Please, sir, can I have some more...
A close up of the male, showing how amazing dragonflies eyes are. 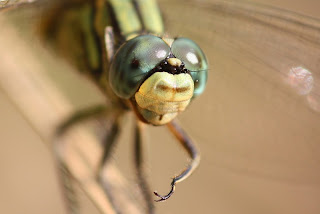 The female
The female is identical to the male. The only difference are the end segments, where the males appendages are closed together, and the females are splayed (see below). I have to take a photo and zoom in just to see the difference in sex. 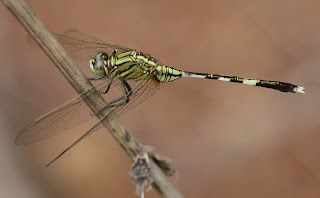 A copula
This is something I have seen on numerous occasions, but have struggled to get good photos as they fly away at the slightest movement. This shows clearly just how similar they are. The markings are slightly different and the female's abdomen is more robust. 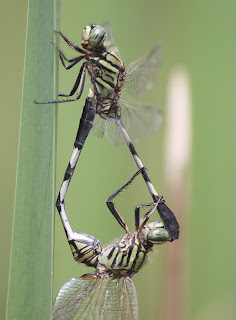 From barren grassy areas to paddy fields, and from ponds to rivers, I have seen this species everywhere in the lowlands all year round. In fact, it was the first ever species I took a photo of... and got me into travelling the country in search of them.
Posted by Dennis Farrell at 9:15 PM