Number: 105
Family: Philosinidae
Genus: Rhinagrion
Species: Rhinagrion viridatum
Common name(s): N/A
Thai name(s): N/A
Habitat: Heavily forested streams, lowlands & uplands
Province(s) sighted: Sai Thong NP (Chaiyaphum); Nam Nao NP (Petchabun); Phu Kradueng NP (Loei); Khao Yai (Nakhorn Ratchasima); Khao Kitchakut NP (Chantaburi); Koh Chang (Trat).
Sightings (by me): Fairly common, but small numbers
In flight (that I have seen): April-December
In my opinion, Rhinagrion viridatum is one of most stunning damselflies that I have ever seen. Firstly, I saw a male at Khao Kitchakut NP. I also saw 2 males and a female at two different stream locations on Koh Chang. Most recently was at Khao Yai NP (more since then). The ones I have seen, all like deep, dark alcoves (some with almost no light) above a deep cut out of the river that is almost still (probably to make it hard for idiots like me to get near them). I originally thought this was R. mima. However, it is now confirmed as R. viridatum. Primarily because of the location (R. mima is only found in a small number of places in the west of Thailand). R. viridatum is found elsewhere. Secondly, The prominent greenish-blue marks on the abdomen differ to that of R. mima.

Since then, I have spotted another solitary male at Phu Kradueng NP. Oddly, this male was basking in glorious sunshine, unlike the other specimens I have seen which seem to like darkened areas.
The male
The male is a medium-sized damselfly but instantly recognisable. Its thorax boasts vivid greenish-blue stripes on black. The abdomen also has greenish-blue dorsal markings and it also has amazingly colourful orange end segments, which you can see from a good distance.

Since I wrote this, I recently spotted several males at a very quiet stream at Sai Thong NP, Chaiyaphum province [24.v.14]. Though it is nothing new for me to spot this species, I was suprised to see 4-5 males in one short trip (usually solitary sightings) and they rested around 6 inches above the water, along the steep banking and in close proximity to each other, instead of perching around 1 1/2 metres above the water in the trees (and then higher as soon as you approach them). They were also fairly easy to approach, unlike earlier specimens which fly away at the slightest movement (though I did have to sit fully in the stream up to my chest in order to get good shots). Worth every squelching sound from my boots and underpants as I walked afterwards! Anyway, I think it is impossible not to fall in love with this species. 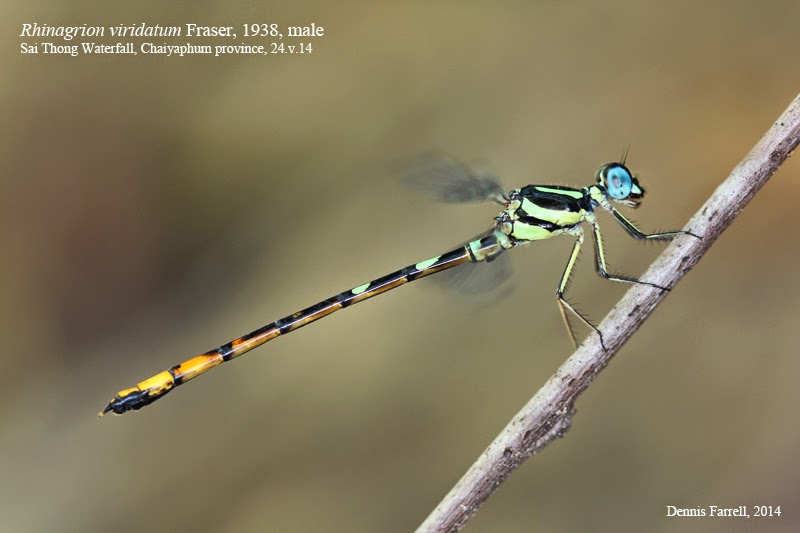 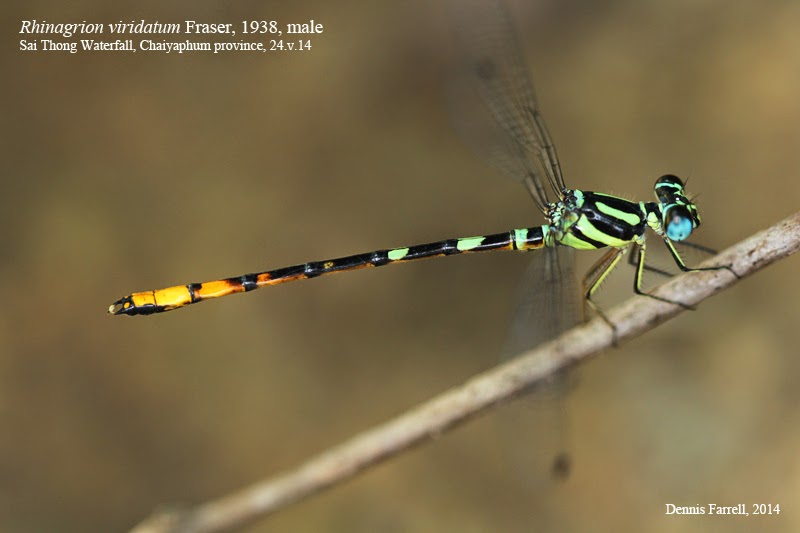 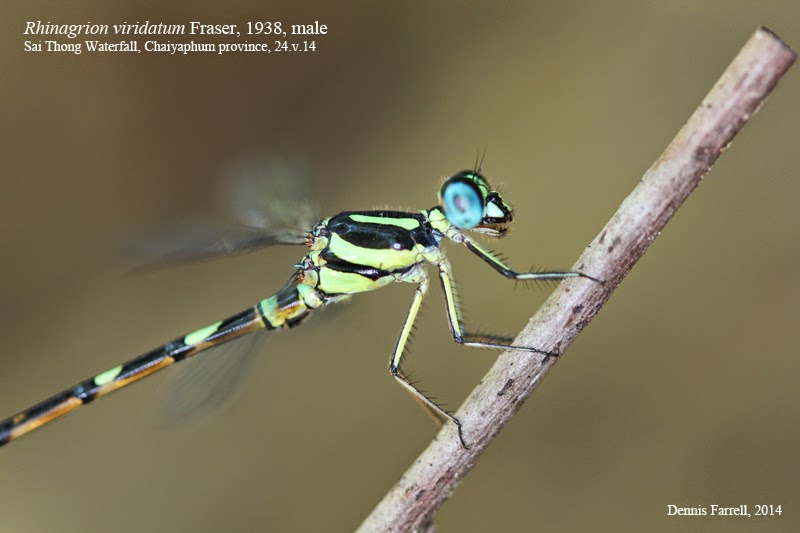 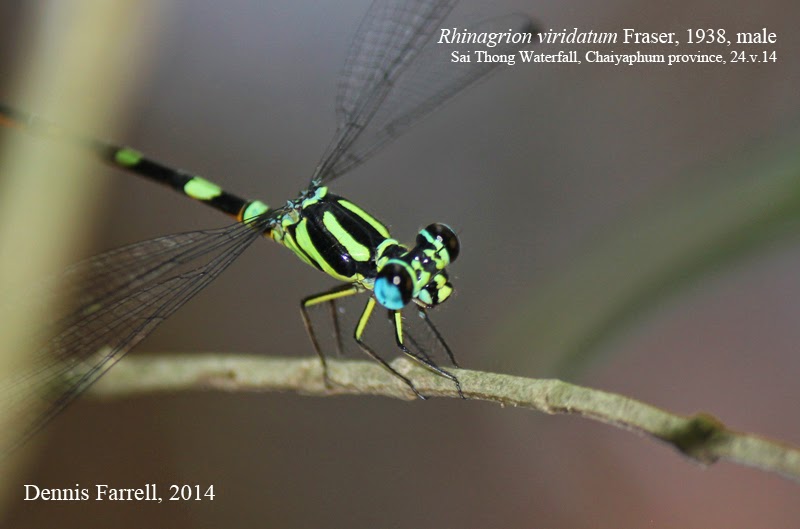 Here's the male I spotted at Nam Nao (and the only male that loved the brightest sunshine in the world). 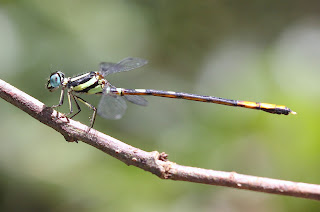 Here's a close-up in the brightest sunshine in the world. Still, makes a nice backdrop, I think. 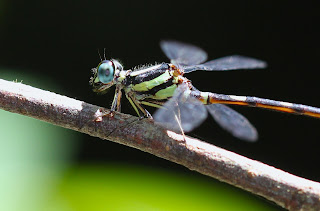 Appendages (lateral view). Note the tuft of hair at the end of the superior appendages. 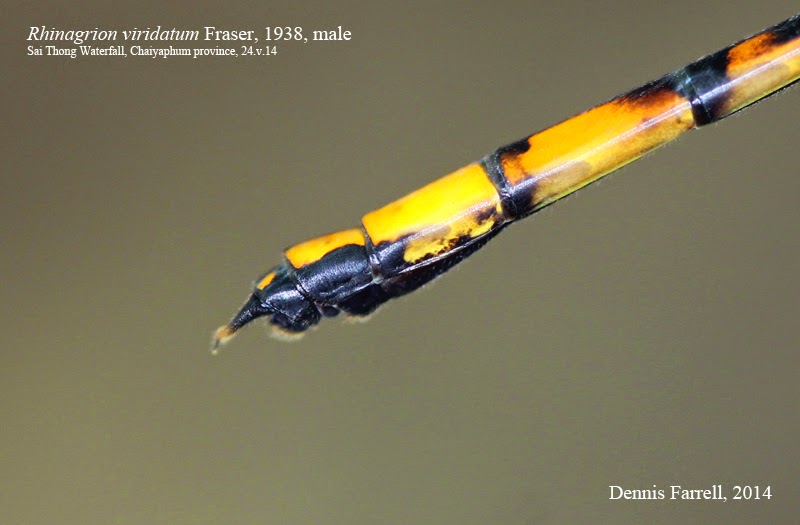 Appendages (dorsal view). Note the two orange dots which are characteristic of this species. It also has whitish tips to the superior appendages. 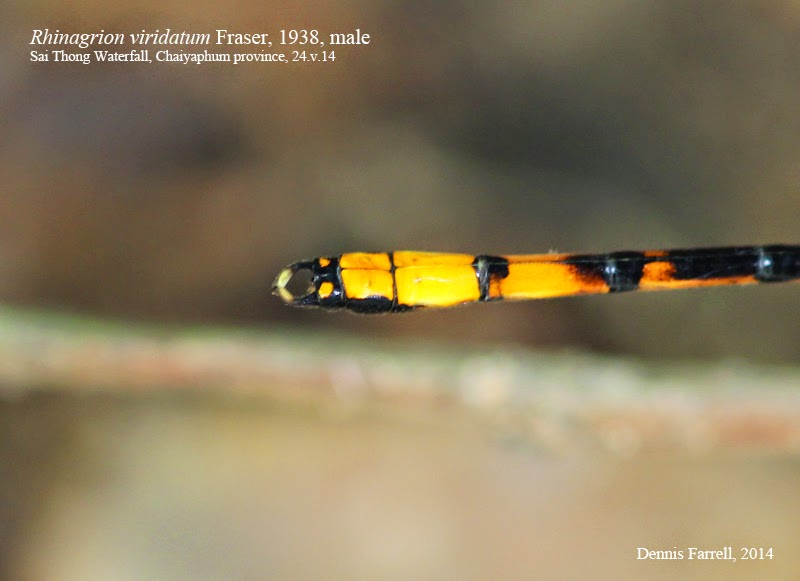 Teneral male
This is a newly emerged male, which I saw at a heavily tree-covered pond, Khao Yai National Park. Note how the wings are parallel to the abdomen. They will open out in time. Also... look how S7-10 segments are crushed flat.... er... that was me! It landed in front of me and a spider pounced on it... I pulled it away just in time, but damaged its abdomen in the process. I hope he survives! 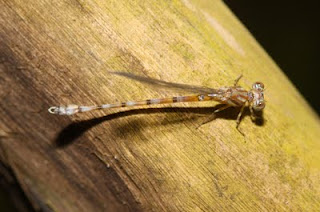 Here, you can see where the spider had him by the abdomen (S1-2), dorsally. It's wings were also damaged. I suppose me squashing its abdomen trying to save it didn't help matters... still, I tried! 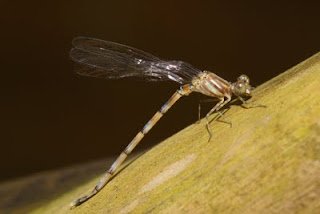 The female
When I visited a number of waterfalls in Koh Chang (13/04/2011), I was surprised to see this species. I saw 2 males and, in a deep, dark alcove which contained a tiny bit of water at the bottom, I saw my first female. I couldn't even hardly see her it was that dark and I had to take a photo to ID her (using flash of course). I managed to get a few shots of her, before she flew straight up and out of the alcove through a tiny hole at the top. 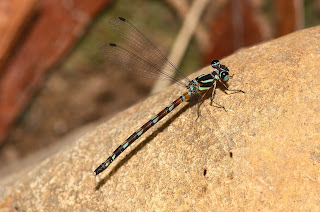 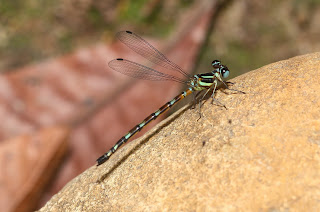 Ovipositing
I also observed her ovipositing into slightly damp, mossy vegetation, which was growing on a vertical bank, about 1.5 metres above a tiny pool at the edge of the stream. 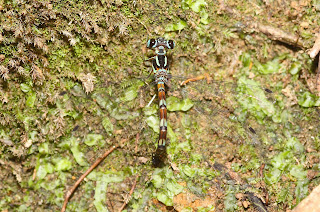 ... and if you look closely, I think that is an egg, but I could be wrong. 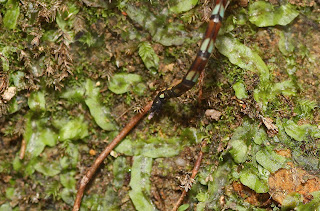 The teneral female ...
Here is a young female I saw at Khao Yai, Nakhorn Ratchasima 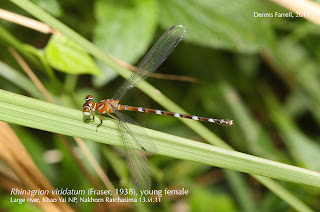 Although they always seem to be in small numbers, I think this species may be more common than first thought, because they are easily missed... not many people look into dark holes along riverbanks. Other people may think they are crazy!
Many thanks to Noppadon Makbun for the information and confirmation of ID.
Posted by Dennis Farrell at 8:24 PM