A few years ago, I decided to chance my arm and looked under a bridge that was underneath a major highway, in Khon Kaen. Just outside the bridge, there was marshland, which I think is the overflow from the River Chi. In the marshland there were two common species of Copera: C. marginipes and C. ciliata. Then a third Copera species then caught my eye. I followed it as it went right under the bridge. Underneath, it was gloomy and had a small puddle. I managed to get a photo of it and I thought it was C. vitta vitta. A while later, Noppadon Makbun informed me that I had incorrectly identified the species and that it was in fact Copera chantaburii. Apparently I was only the second to identify this species outside Chantaburi, which pleased me no end. It is, however, close to Copera marginipes. There are a number of differences to identify it though. Since that day, I have been back a number of times and taken better photos and also spotted the species in a number of other places around Khon Kaen, and I also spotted it in Chantaburi of all places ;)

The male
The male is very similar to the male C. marginipes, but the easiest way to tell them apart is to look at the caudal appandages, which have very little white on them compared to that of C. marginipes. Also, the markings on the thorax are different and overall it is a little smaller. It also likes to be in very dark areas. 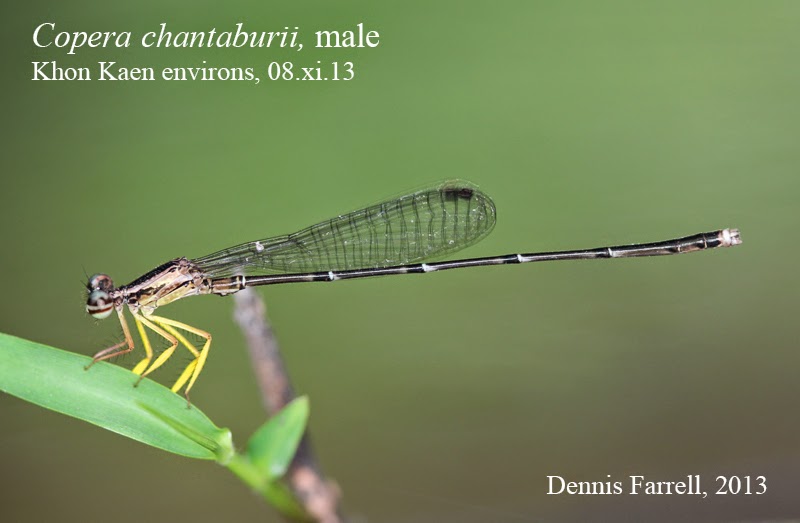 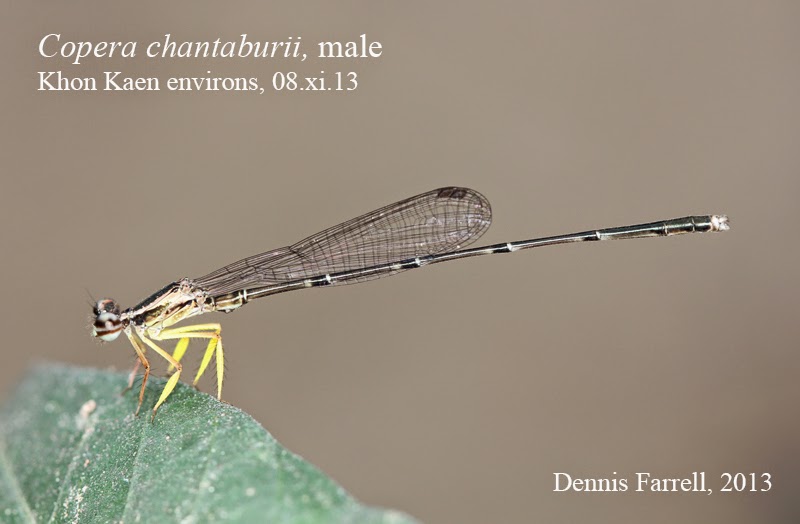 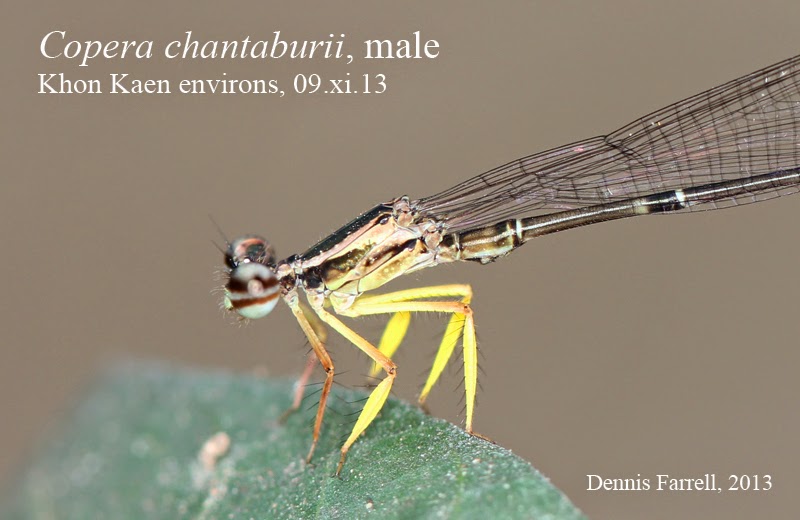 An unfortunate ending for this one ... 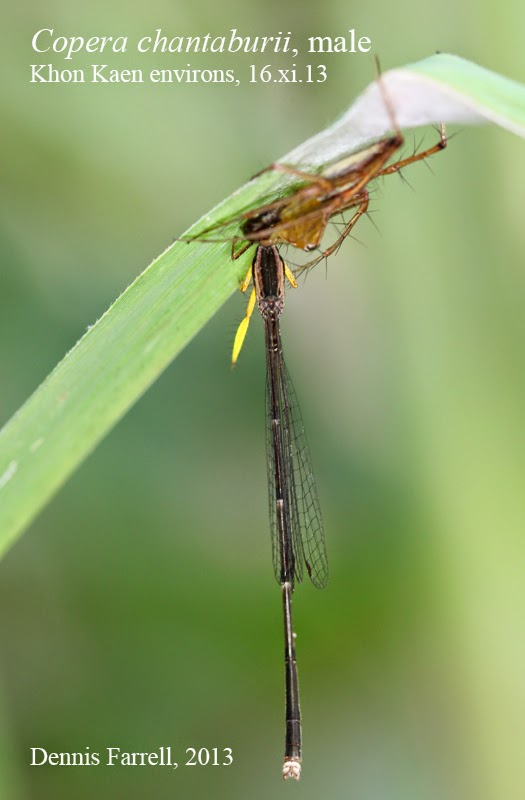 The female
The female is extremely difficult to spot as it hangs around in the darkest of areas, in this instance resting on a dark stick, over black mud, under a darkened tunnel... how nice of it to make photography impossible! Also the female itself is also very dark in colour and I only could see the female's dark grey end segments and white rings on the abdomen. 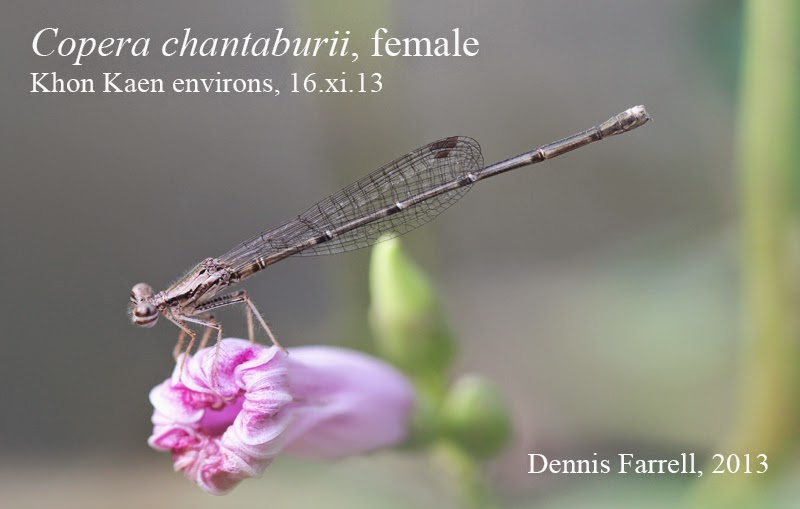 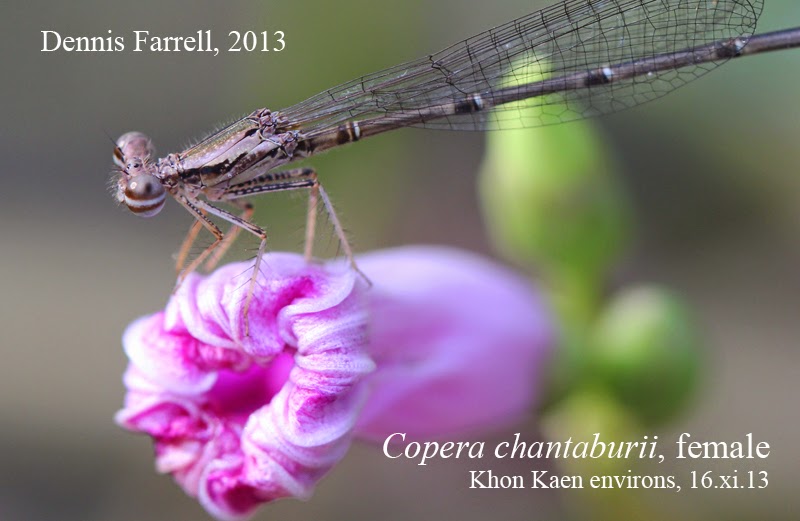 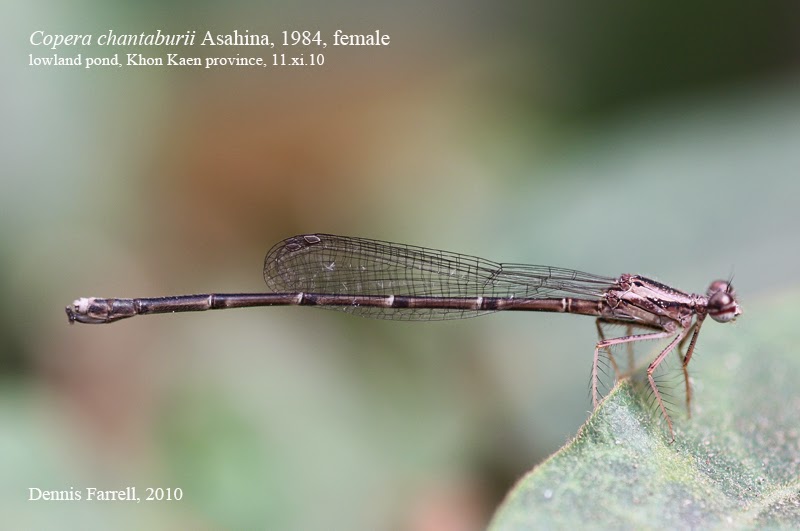 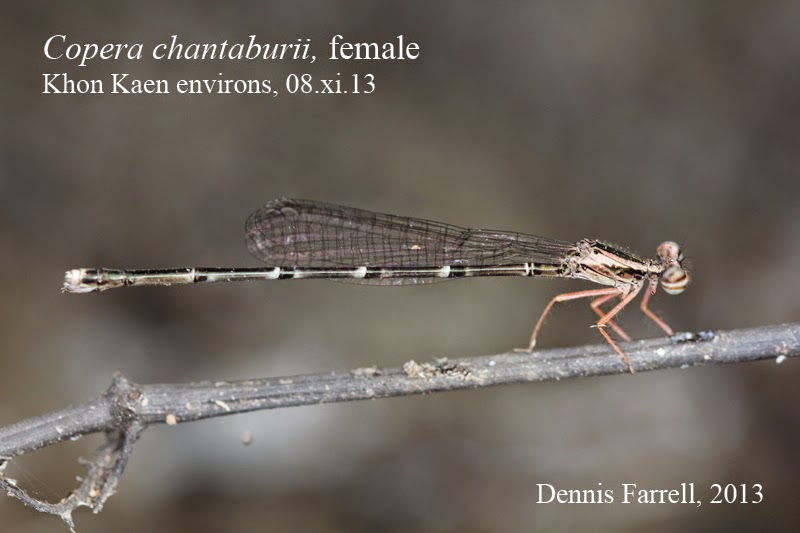 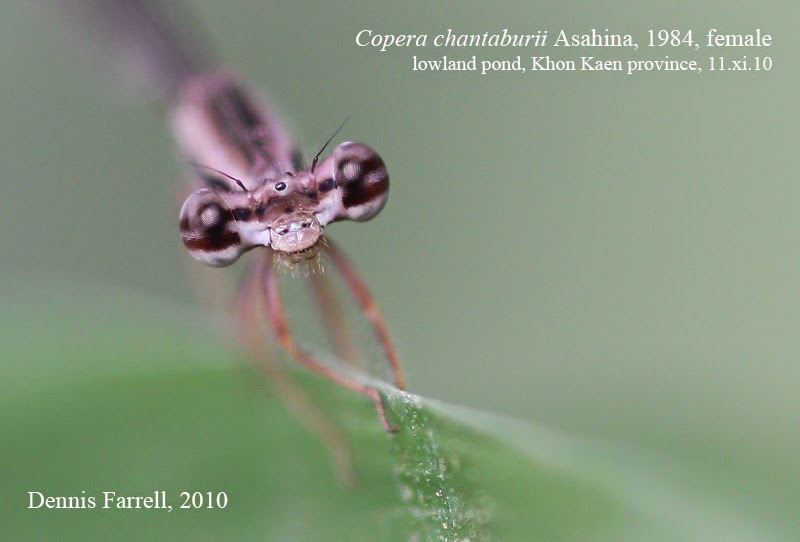 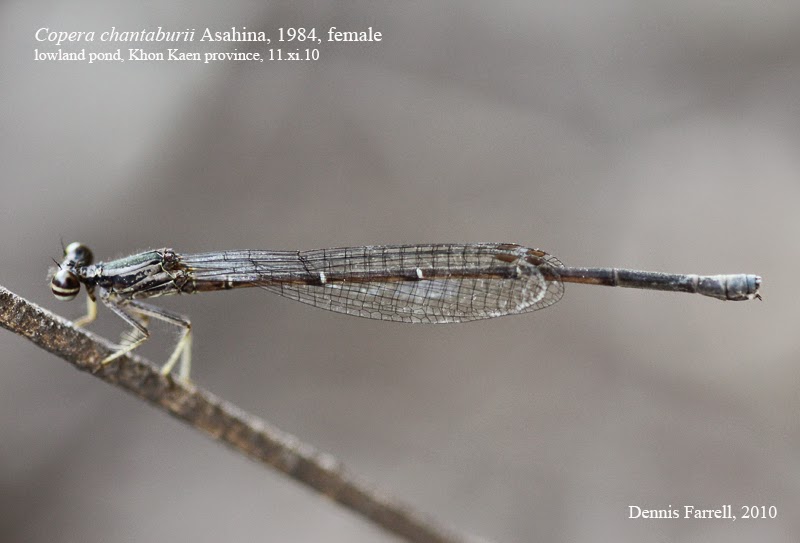 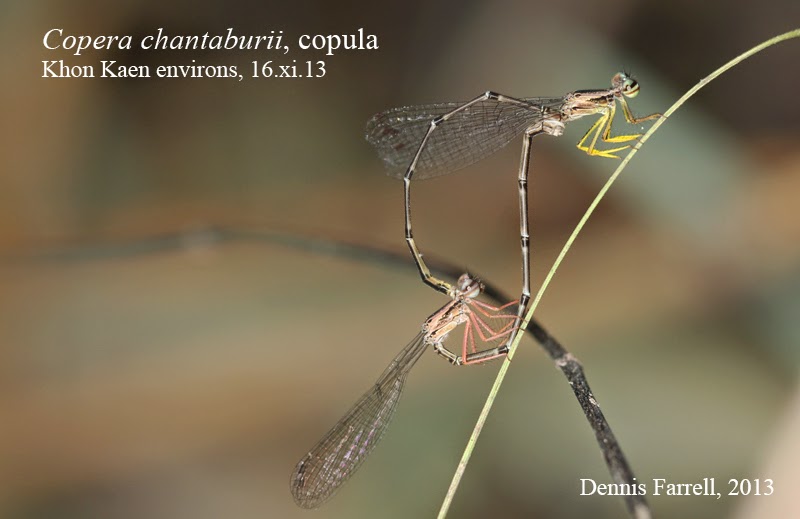 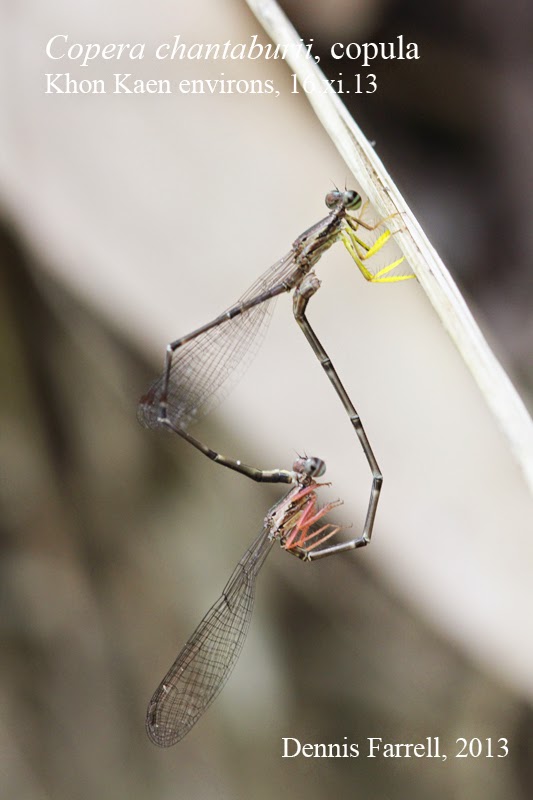 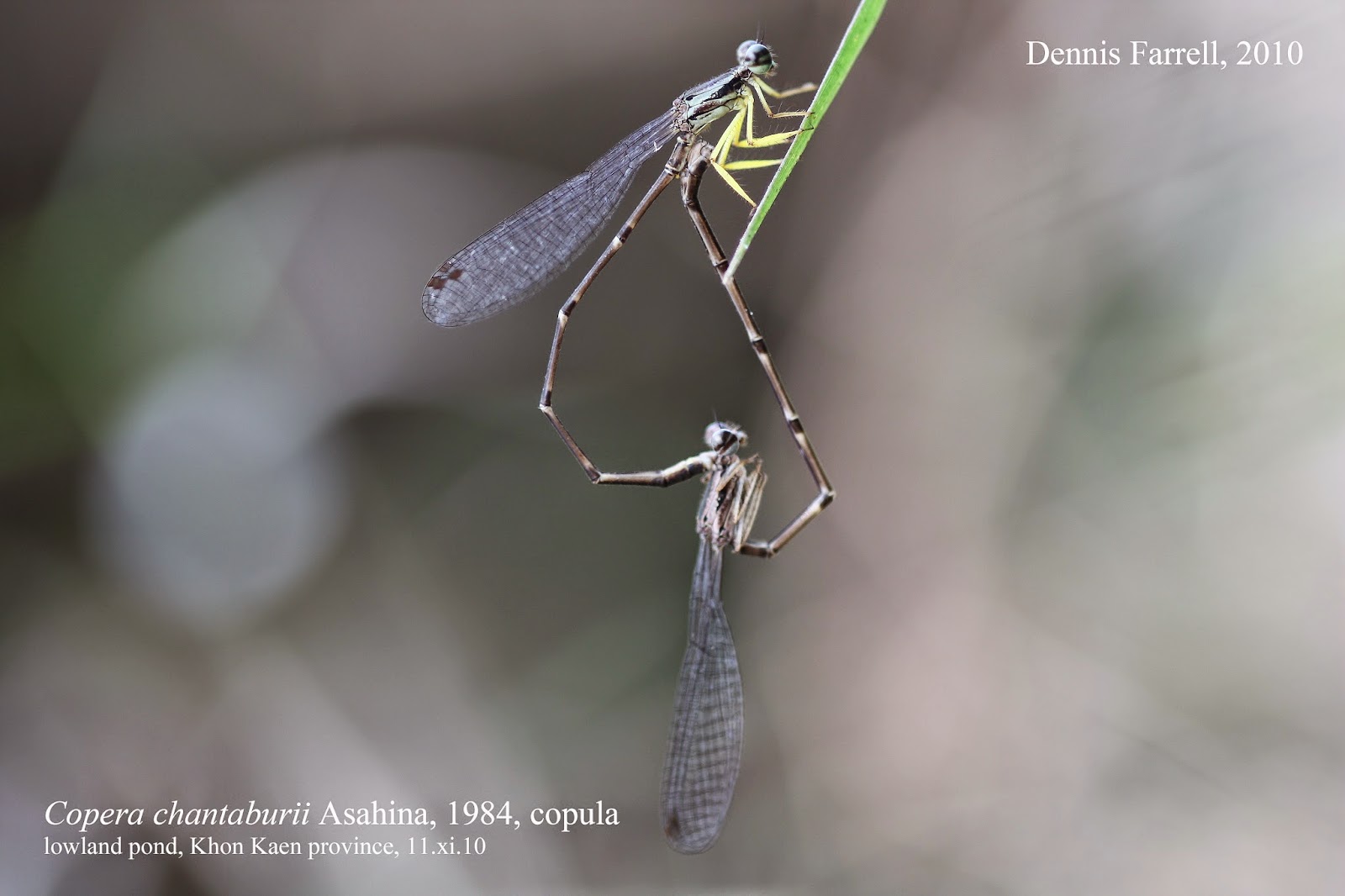 I'm not sure just how common this species is, but it is doing very well in Khon Kaen. I saw this species on a regular basis from October-December.
Posted by Dennis Farrell at 8:48 PM