When I visited Chiang Mai from March-May 2010, I spent a few afternoons at a nice, but very busy waterfall, called Huay Gairo (spelling?), on the way to Doi Suthep. While there I noticed one or two large dragonflies patrolling the area but never wanting to land... ever! Just up from the waterfall was another tiny stream not even .5 metres wide. There were a number of common damsefllies there, but not much else. Until I saw one of those patrolling dragonflies resting! It was some distance away and I had to move with caution through the stream to get closer. And off it went... missed it. I began looking for other species again, and noticed, to my amazement, it had returned to the very same spot. This time I was already close and managed to fire off a number of photos to get it. And there it was... a new dragonfly species for me: Anax immaculifrons.

The male
I managed to capture photos of this magnificent dragonfly. The male is large in size with green and black stripes to the thorax and an amazing orange abdomen. Its caudal appendages are also large. It was resting in the shade from the hot afternoon sun under a large leaf in the reeds. I was burning to death in the sun, but I didn't care. Not sure why it's nicknamed Blue Darner. Maybe there are variations on the colour. Surely, it should be Orange Darner! 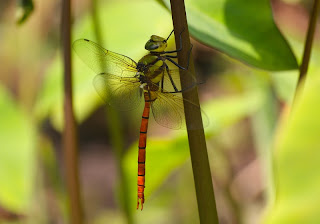 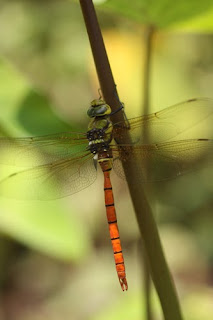 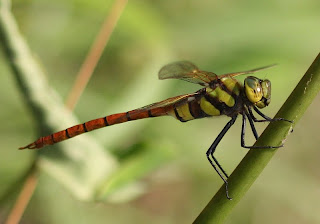 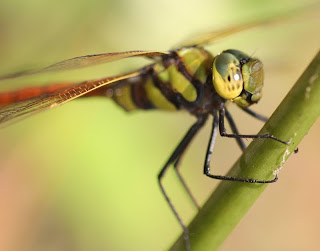 The female
I was lucky to spot the female in flight (though briefly) when I visited Phu Rua NP, Loei province. I saw two males combating with other species. Suddenly, this female appeared from nowhere in front of me hovered for a few seconds above the stream and disappeared just as quickly as she appeared. Still, great to see a female at last!

Here's a couple of images that are OK... one with flash and one without. I think it can be confidently ID'd from these photos (and a male was close by). 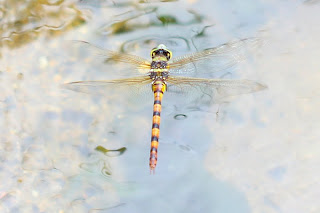 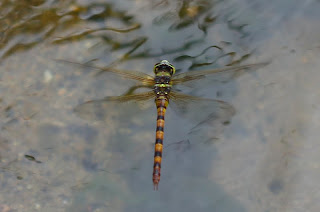 This really is a truly magnificent creature.
Posted by Dennis Farrell at 4:57 AM