Another species from the Libellulidae family that I have spotted on a few occasions, is Zyxomma petiolatum. It is not easy to spot as it tends to hide away in the bushes close to water and is very well disguised.

The male
The male is easy to identify because of the bulbous S1 of the abdomen. It has green eyes and the rest of the thorax/abdomen are a yellow ochre. It also has black rings on each segment of the abdomen.  The tips of the wings darken as it matures. 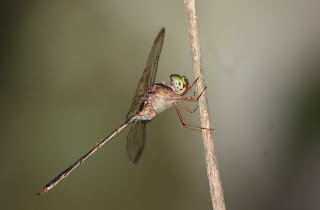 Here is the same specimen dorsally. 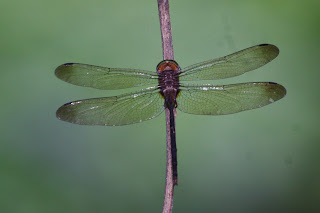 The teneral male...
This young male is much lighter in colour compared to that of the mature adult. The wings were also clear (top two photos @ Nam Nao, third @ Chiang Mai). 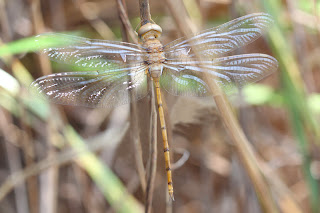 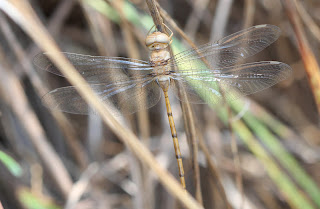 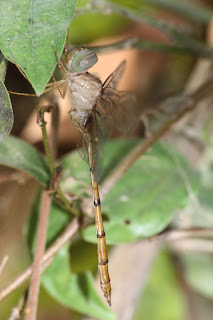 The female
The female has an even more bulbous abdomen than the male... she almost looks pregnant. Otherwise, it is the same. This specimen flew into my bungalow in Khao Yai at night attracted by the light. I left her there for the night as it was pouring with rain. She flew away in the morning.

Here she perched happily on the edge of the very net I tried to catch her with!
You can see just how dull she is. The wings have a distinct brown tinge to them. 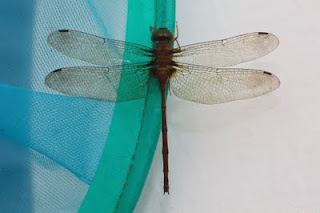 Here it shows just how prominent and almost abnormal looking S1 of her abdomen is. 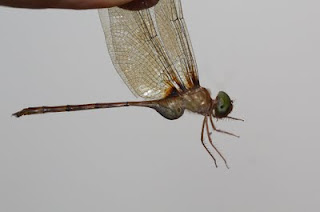 I am not sure how common this species is, but I have seen it in many times in Khon Kaen (especially in the school corridors), as well as in Khao Yai and Chiang Mai, so think it must be widespread. Also, I have seen it in February-July though it could be in flight all year.
Posted by Dennis Farrell at 9:24 PM