The fourth damselfly (potentially) from the Aciagrion genus I have seen, is Aciagrion occidentale. As mentioned in my previous post it is very difficult to distinguish between A. occidentale and A. borneense.

The male
The male does have a very slight tinge of green dorsally on the thorax, but is very pale compared to that of A. borneense. The ocular stripe is also slimmer, as too is the abdomen. Otherwise, the two look alike. 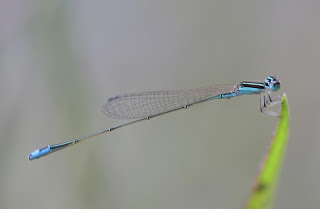 The female
The abdomen is slightly slimmer than that of A. borneense. The ocular stripe is also slimmer. I could be completely wrong, however! 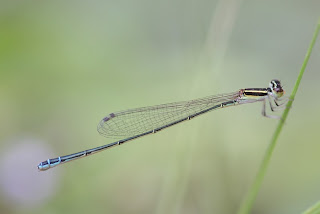 I have seen this species at Mukdahan National Park. It is a small, slim species that you have to look for carefully.

Since I posted this page, Oleg Kosterin believes this still to be A. borneense. Though probably correct, I will leave this post up for the time being. Maybe someone can shed even more light on the species.

As I cannot confirm as of yet whether this is or is not A. occidentale (or a different species altogether) I cannot count it as a separate species ... hopefully one day.