Another common Orthetrum species is Orthetrum chrysis. However, it is easily confused with O. pruinosum neglectum (I used to get confused all the time). The male is much redder in colour than its counterpart and also has a red tinge to the face.

The male
The male is often spotted by the water's edge from rivers to virtually dried up streams in lowlands and forested areas. The abdomen of the adult male is a vivid red and also has a red tinge to the face. The thorax is a brown colour and the eyes has a slight blue tint to them. 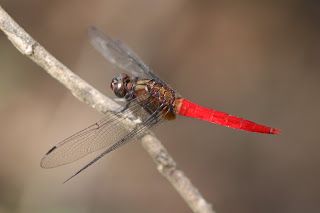 This shows how red his frons (face) is. O. pruinosum neglectum is blue/grey. 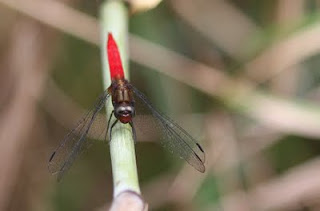 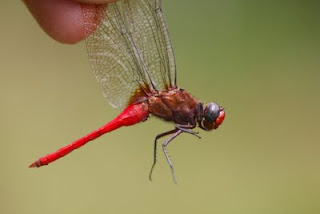 Red nose ...
The red nose (or frons) is the easy way to tell the difference
in this species and O. Pruinosum Neglectum
Looks a bit like Alex Ferguson, I think. 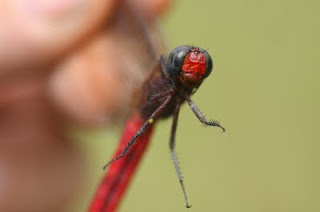 In perfect harmony...
This photo is ideal for showing the difference between the two closely related Orthetrum species. The male Orthetrum chrysis (below), and O. pruinosum neglectum (top). O. Pruinosum Neglectum is much more of a pastel red and not as vivid. The thorax also has more of a blue tinge to it. 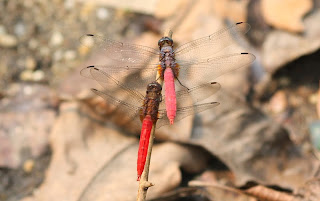 The female...
This one had just finished ovipositing, with the male hovering above. She flew about 3 metres away from the water's edge and into some bushes, where I caught her. The female is more of an orange colour than other females of the same genus. 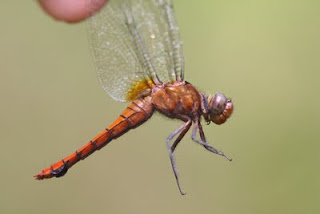 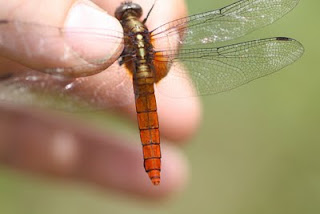 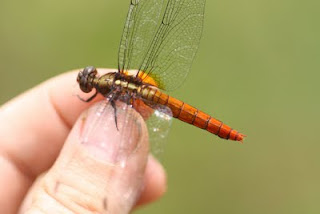 An ancient female (probably) ...
This is a very very old and worn out female (though there is a small possibility it is O. pruinosum neglectum) 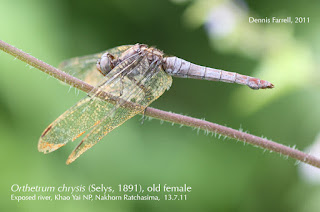 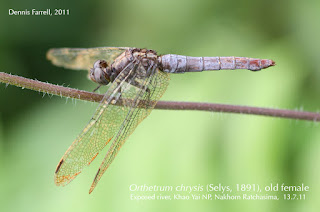 Teneral female
This female had only just emerged and already carried a lot of the red/orange colouration. This ensures that I incorrectly identified the previous teneral female (which has now been removed). I saw the below specimen at Nam Nao Helicopter Pad lake at the 25th of February. It is probably one of the first to emerge for the year. 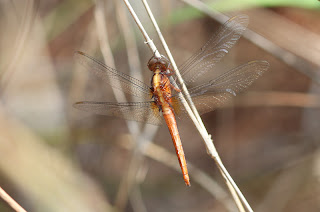 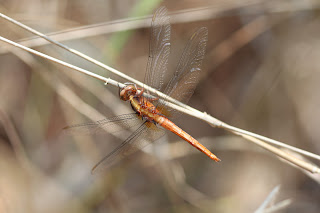 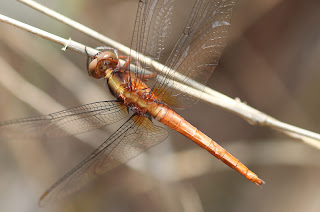 A copula
I have spotted a number of copula of this species, but they never hang around and are really difficult to photograph. This is about the best so far, which I saw at Phu Kradueng NP, Loei province. 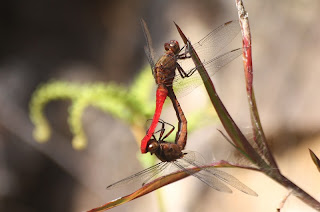 I have seen this species at many locations throughout Thailand, from raging rivers to almost bone dry mud holes. They really are not that fussy, though they do like lots of tree cover. The problem with not being fussy is that they co-habit with O. glaucum and O. pruinosum neglectum. The latter being a pain to differentiate. I hope this blog helps.
Posted by Dennis Farrell at 7:49 PM