A common member of the Libellulidae family is Neurothemis intermedia atalanta. It can be seen in many places from open wasteland to the edge of forests. I would say that the female is more commonly seen than the male.

The male
The male is easily identifiable. It is generally orange/yellow in colour. It has two broken black lines running dorsally along the abdomen. The stigma is black and becomes ochre as it ages. The eyes are cherry red dorsally. The base of the eye is green/white. It has feint markings on the synthorax.

Strangely enough, the mature adult male is scarce - for me anyway. It is similar to the younger male, but the abdomen colour has change to a bold orange, and the colour at the wing base is more prominent. Though scarcely seen, this male was spotted in my back garden! 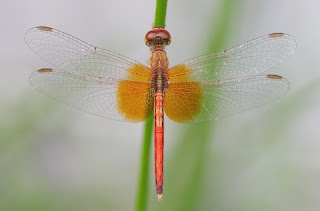 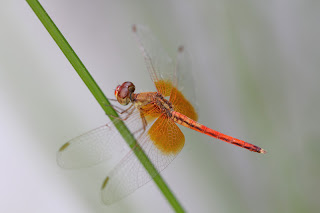 Male, in the hand 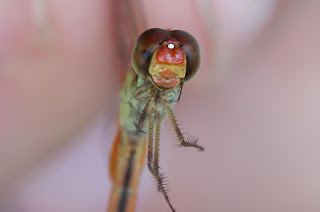 A male starting to turn orange ... 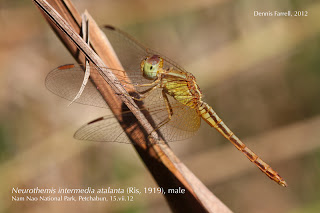 Sub-adult male
The young male is very similar to the female and are very common at this stage. 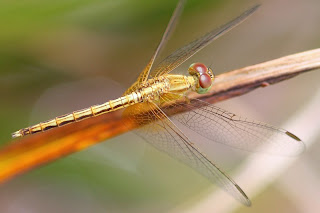 The female
The female is very similar to the young male. The black dorsal lines are thicker than the males and the terminal segments are generally darker. The colour at the base of the wings is generally much less prominent. 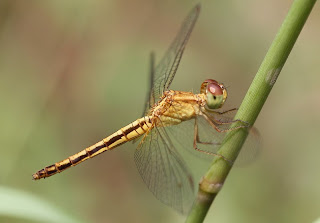 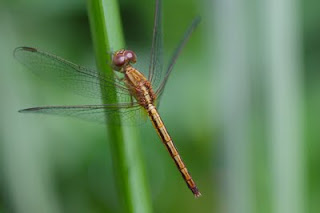 Female, in the hand 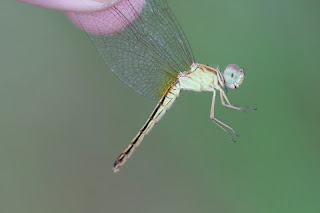 You can see this species throughout the country, especially in open vasting fields and is commonly seen during the cool season.
Posted by Dennis Farrell at 10:05 PM