Another Ceriagrion sp. I saw back in December (2011), I thought originally was simply Ceriagrion chaoi. But, looking more carefully at the photos when I got home, I realised that it must have been a new species for me. Primarily because the abdomen is much thicker and is also longer. I sent photos of the male to Noppadon Makbun and he confirmed that it indeed wasn't Ceriagrion chaoi, but was difficult to identify from the photos I sent. I have since remembered that I had a few photos (not very good ones though) of two different copula I saw on the same day. Looking closely at the female, it has a distinct mark on the thorax.

Recently, I found another similar species, but with a longer abdomen, which turned out to Ceriagrion malaisei. Now I am fairly confident that this is a species new to Thailand and therefore will have to return one day ... if I can remember where the bloody pond even was!


The male
The male is almost identical to C. Chaoi, but has a longer and more robust abdomen. 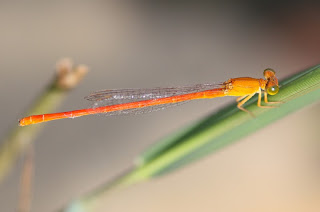 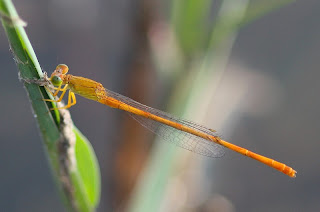 The female (part of a copula)
As you can see (just below the male) is a distinct mark on the thorax of the female). 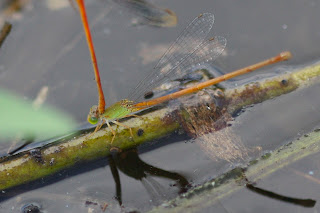 A copula
Here you can still see a distinct mark on the thorax of another female. 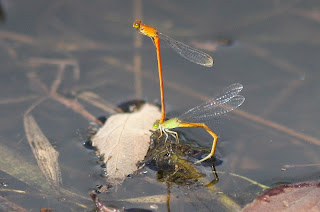 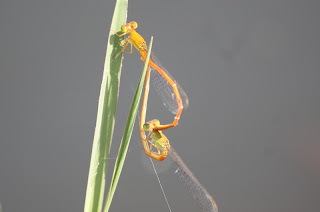 I saw this species, which was fairly abundant, at a pond in-between Kabin Buri and Khorat. It was at an uplands pond (approx. 800 metres up) on the 304 highway just past Tap Lan National Park (which incidentally, is the strangest NP I have ever visited - there is literally nothing there). I noticed the pond as I reached the top of a mountain and was driving extremely slowly behind a truck. I managed to find a place to park and went to have a look... I'm glad I did.
Posted by Dennis Farrell at 12:30 AM