If you visit any field in the Khon Kaen area, you are sure to bump into this tiny dragonfly. Neurothemis tullia is a very common species that I have seen many many times. I would say it is also one of the smallest dragonflies, certainly that I have seen anyway.

The male
The male changes in colour slightly as it ages. On the adult male, the most obvious feature are its wings. Both the forewings and hindwings have black colouration from the base of the wings to about half way. There is also a white patch following the black. This is only on the adult males. Youngest males don't have the white mark yet (see teneral male). There is a cream dorsal line with black edging running from the prothorax to S-8 on the abdomen, which disappears as it matures.  The synthorax is brown/cream and darkens with age. S9-10 are black, caudal appendages white. The eyes are cherry red dorsally and green at the base.

The mature male...
This is the least common sight amongst this species. Most males are similar to the ones below. However, the mature male has a completely black abdomen. The white patches on the wings also seem to fade with age. 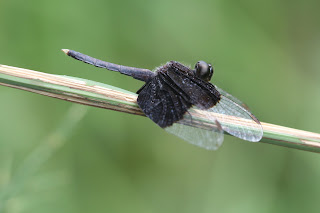 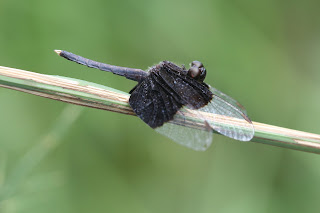 The male
This is the most common sight. Most males have a cream dorsal stripe along the abdomen and the white patch on the wings seems far more prominent. 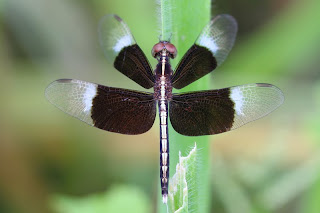 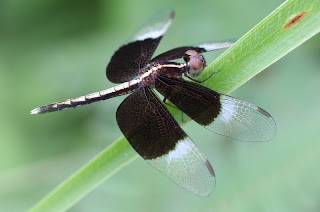 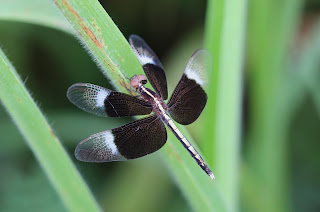 The teneral male
This very young male is the same as the above, but doesn't yet have the white patches on the wings. 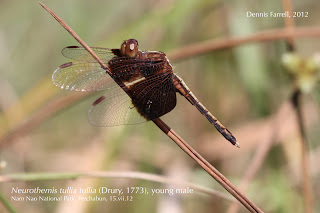 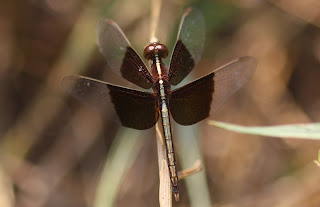 The female
The female is very similar to the male, except for the wings. The abdomen is also stouter. The white patch on the wings becomes more prominent as it ages. 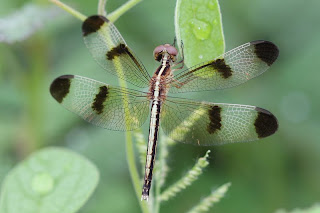 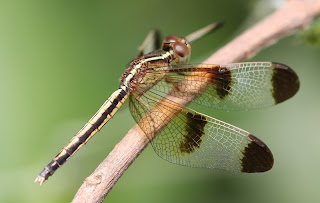 A common, yet extremely nice looking dragonfly. It is also very small and a shy creature making it difficult to photograph.