Another uncommon montane species I was lucky enough to spot when I visited Doi Inthanonon, Chiang Mai, was Rhinocypha iridea iridea. It was sitting on a branch that streched out across the river and was happily soaking up the afternoon sun.

The male
The markings on the abdomen make it easy to identify. This was the only male that I saw in the whole time I was in Chiang Mai. 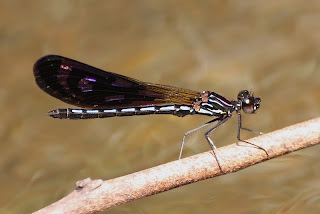 The female ???
This female was the only other specimen anywhere near the male above. It was perched on a branch very close by and they often came into contact with one another before the returned back to their exact places. I haven't seen any photos of the female and can only assume that this is it. Also, being at around 1400-1500 metres up, I'm not sure other species of the genus, go that high. If anyone knows otherwise, please let me know. 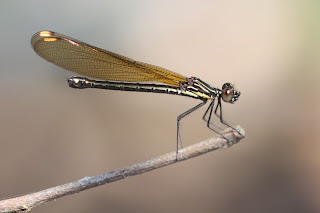