Back in April 2010, I visited a place called Ob Khan National Park, a short distance outside Chiang Mai. It was quiet on the odonata front, but I did manage to see a large female dragonfly high up in the trees... way too high up to photograph. Unperturbed, I climbed a tree on the opposite side of the stream to the dragonfly and carefully made my way up. I managed to get high up into the tree and into a decent position, without scaring the dragonfly off. I took a few photos with my Sigma 200-300 mm Macro lens and tried to move a little closer out onto the branches so that I could scale down to my 105 mm lens which is sharper. Crack.... the branch snapped and down I went, about 15 feet and into the stream. Amazingly, I instinctively put my camera in the air as I fell. I hurt my pride (and my elbow), but the camera was fine. Anyway, this is the best photo I managed to get (female below). Not bad considering the situation! As it turned out, it was a female Camacinia gigantea. A rather beautiful female at that. Many thanks to Noppadon Makbun for identifying this species.

3 years later and I have managed to finally bump into the male ... amazingly, he was at a swampy tree-lined area, just outside Khon Kaen city limits. It is another provincial record to add to my growing list for Khon Kaen!

The male
Though similar to other species, it is easy to ID as it is large in size (as is mentioned in its name!!) It is similar to that of the female, but darker in colour. Also, like the female I saw, he was perched high up in the trees. 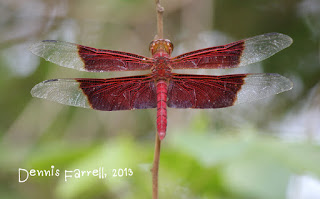 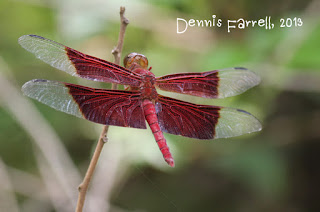 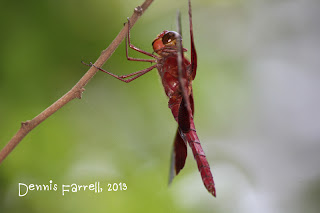 The female
It is similar to the male and large in size, but is much lighter in colour. 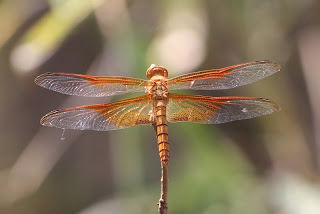 Posted by Dennis Farrell at 7:29 PM