Another trip to Phu Khieo, but at completely the wrong time of year. November. Not really a time to expect to find new species. However, with lots of butterflies zipping around, I had half and eye on finding the elusive Libellago hyalina (a late-season species), which has evaded my camera since I started searching for it there a year ago. There was one report of it being recorded there, though this was quite a while ago and it may not even be there now, or is certainly very rare at least.  Searching the river at the lower reaches of Phu Khieo, I was happily snapping away at a few butterflies, as well as the odd ode. I was really happy to spot a Mortonagrion aborense copula for the first time and was amazed to finally scratch that seven-year itch in the shape of Thrithemis festiva, female. The males are super common, but until now I only had a fleeting glance of a female ovipositing (no chance of a photo). I continued searching and searching, but to no avail. Suddenly, from deep within the bushes I disturbed a large dragonfly which flew straight past me. I was gutted. I knew it was something special, but thought I had missed the chance. Amazingly, it returned and flew back under cover. I crept along on all fours desperately trying not to disturb it. Camera at the ready and my bag was snagged on a twig. I moved. The twig moved. The dragonfly moved ... it was off again. Aaarrrggghhh! Yet, within 30 seconds it was back again and I was still in position. I snapped away happily and managed to get some decent shots. Later in the day, I passed where it had been and amazingly, he was now right at the edge almost in direct sunlight, though he was spooked easily. When I returned home I did a little digging and it turns out to be Polycanthagyna erythromelas, easily one of the most handsome dragonflies I have seen. So, who says it is too late in the year? Over to next weekend .... 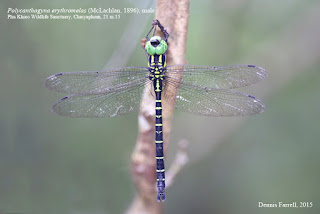 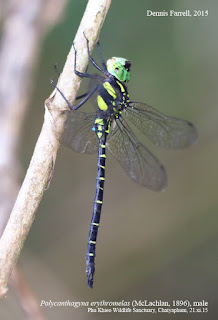 Posted by Dennis Farrell at 10:28 PM No comments: