When I visited Khao Soi Dao National Park back in December, I arrived an hour before the place opened. I look around and managed to find a small man-made pond just outside the entrance. Within seconds I found a new species. It was confirmed by Noppadon Makbun as being Paracercion calamorum dyeri. Here I only saw the one male (on the leaf below).

The male
The male is heavily pruinosed on the synthorax and the eyes are an amber colour. The abdomen is black and S8-9 are bright blue. The caudal appendages are also blue. If you look through the pruinosum, you can see the thoracic marks. 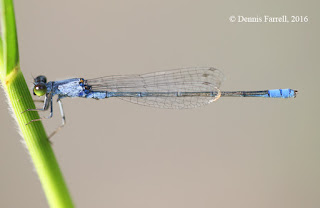 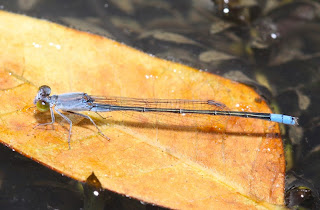 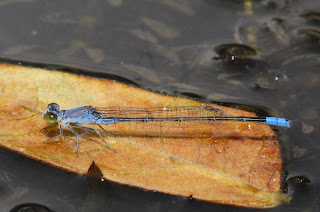 Big brother is watching...
Here is the male again, which I found at another pond in the same area. Here the water was crystal clear and there were many males. This one is sitting on top of an exuviae, which is obviously from a dragonfly. It gives you an idea of its size. 1 extra point if you can identify the exuviae... 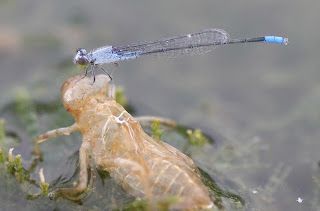 I thought I saw the female, but I was wrong. I will post a photo when I find one.
Posted by Dennis Farrell at 9:22 AM