A very small and uncommon uplands dragonfly that catches my eye every time, is Palpopleura s. sexmaculata. It is a wonderful little dragonfly that is a really odd shape. I first saw this species when I went to Phu Kradeung National Park for the first time in October 2008. I saw the female only. I was amazed by the shape of its abdomen. I have since also spotted several of them at Nam Nao NP and environs (including a solitary male at a tiny roadside ditch in Nam Nao town), a man-made pond at Phu Rua NP and a single female at Doi Inthanon.

The male
The strange thing is, until I visited Phu Kradeung for the second time I had only seen the female on 2 occasions.  The last time I went to Phu Kradeung in December, I saw around 30 specimens of the male all along a 3 kms walk from the top of the mountain to the entrance to the headquarters. They were extremely skittish and difficult to get close to. The markings on the wings are unique, but the one thing that makes it really stand out is its bulbous bright blue abdomen. 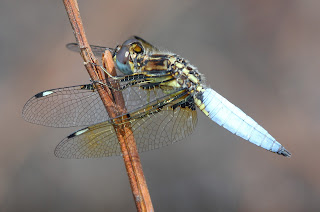 Male, in the hand - Many damselflies are bigger than this! It makes up for its size with its beauty though!

The female
The female has different markings to the male and is a yellow colour. However, it too, has an enormous abdomen in comparison to its size. 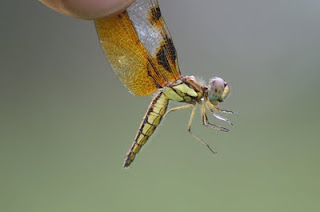 Posted by Dennis Farrell at 9:09 PM