The first ever Coeliccia species that I saw was when I first visited Nam Nao National Park in October 2008. And what a beautiful sight it was too. Coeliccia poungyi is a stunning species and is easily recognisable, but really difficult to get near and photograph. It is a medium-sized damselfly and a sight I will never forget seeing for the first time.

The male
The male is striking in appearance with sky blue and black markings on the thorax and a black abdomen with bright orange end segments. 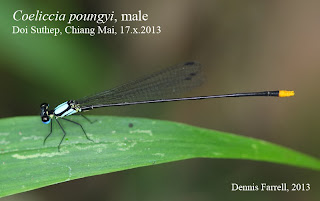 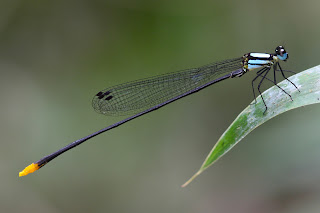 The sub-adult male
The young male has the exact same markings as the adult, but the blue markings on the abdomen as still yellow. They will turn blue in time. 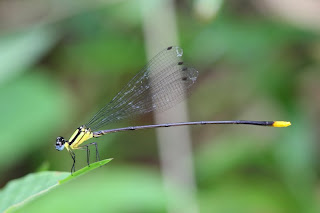 In the hand...
Here's another young male that I caught at Phu Rua. 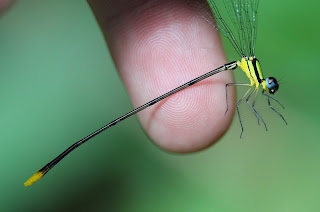 The female
The female is easily confused with other Coeliccia species, but is actually quite easy to differentiate. The end segments of the abdomen are a solid orange/yellow unlike most others. 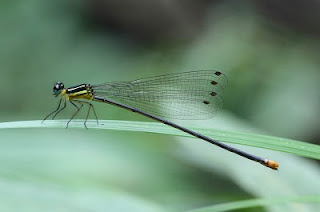 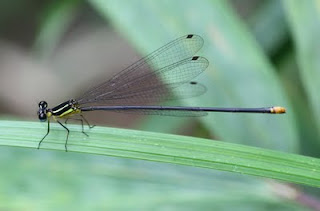 The copula...
I was lucky enough to spot and photograph a copula at Phu Rua NP recently. 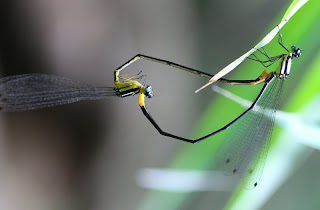 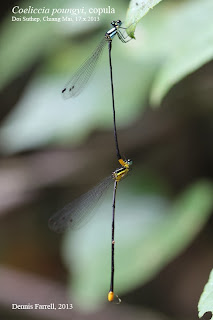 ... and another ovipositing at Nam Nao NP 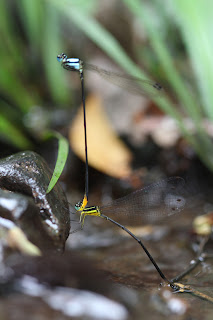 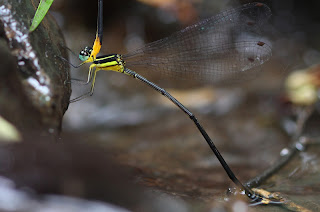 I have seen this species at a number of places throughout northern, northeastern and eastern Thailand, but it seems most abundant at Nam Nao National Park, Petchabun province and Phu Rua NP, Loei province. There are 4 species of Coeliccia living together at Nam Nao. C. chromothorax, C. didyma and a species very close to that of C. loogali  and they live in good numbers. You can find the four species from mid-late year at the river which runs through the headquarters. Like many damselflies, look sightly away from the river's edge to find the females.
Posted by Dennis Farrell at 4:33 AM