Thanks to Noppadon Makbun's expertise and knowledge, I have been able to add a new species to my list. This time in the shape of Aethriamanta gracilis. The species is easily confused with Brachydiplax farinosa and Brachydiplax sobrina. However, Noppadon's keen eye said that it is in fact a new species for me as it has 6 antenodal crossveins. Aethriamanta aethra also has 6 antenodal crossveins. However, A. aethra is a deeper blue, the black thoracic markings are more prominent and the colouration to the base of the hind wings is much darker (almost black) and prominent. This species is also slightly smaller than Brachydiplax and it's abdomen seems stouter, yet this is difficult to spot in the field.
The male
Very similar to Brachydiplax chalybea, but much smaller and similar to its cousin, A. aethra, but a much brighter powder blue and slightly smaller. I have seen the species now at two different locations, but both similar environments (exposed marshy pond areas). I think this species is more common than believed. However, it is easily overlooked as it resides alongside more common species ... for me size (or lack of it) is key to IDing this species in the field. 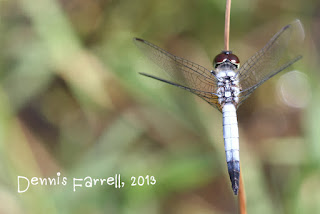 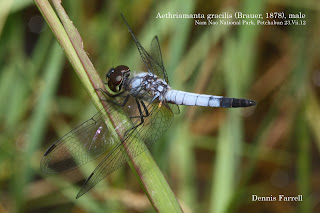 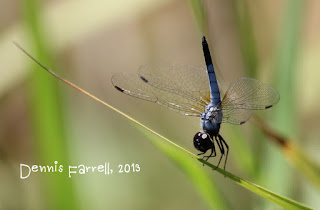 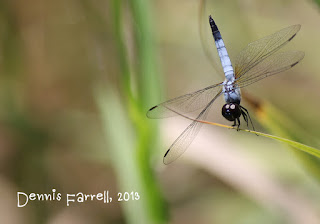 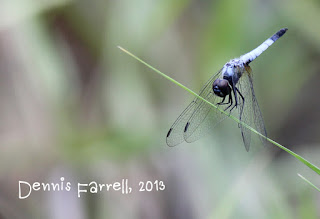 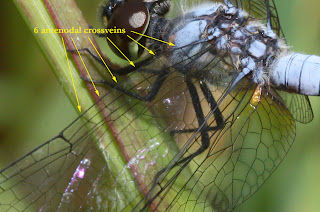 The female
I am now pretty confident that this is also the female. I have always thought that it looked different and now - thanks to Noppadon's input - I can see that it, too, has 6 antenodal veins (can clearly be seen as part of the copula below). So I am hoping that this is also Aethriamanta gracilis. You can also see that she is clearly carrying eggs, which are a beautiful colour. 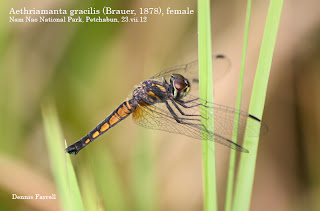 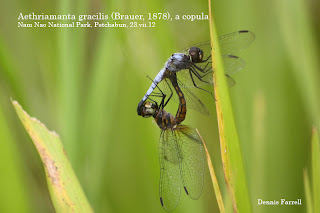 Once again, many many thanks to Noppadon for the ID and the information.
Posted by Dennis Farrell at 5:51 AM