On my last day at Khao Yai, I decided to visit Huew Sawat Waterfall (spelling?). There were millions of tourists and so decided to search above the waterfall, where it was much quieter. Within a few metres of walking, I noticed a  Rhinagrion sp. above me on a tree trunk in almost darkness. I first thought it would be Rhinagrion viridatum. However, it almost flew straight into my face and I noticed just how vivid its blue face was. I waited for him to return to the same spot (as they all seem to do if you are quiet) and he did. I managed to get a few, half-decent photos in almost complete darkness. When I looked at the photos, I noticed that the thoracic markings were different and the colours were very different (especially the bright red underside of the last few segments and the whitish claspers. I closed in silently, until crack!... I stood on a large twig. Amazingly, he flew upwards and then landed on my hand (I was next to his tree). He was on my hand without the camera, so had to work carefully and I managed to catch him.

As it turns out, it's Rhinagrion hainanense, which has been described recently and comes from Vietnam and Laos. First thing I would like to do, is thank Sebastien Delongee for providing information which should have led me to the correct ID, but I was ignorant. It took Oleg Kosterin to believe... thanks to you both... and Noppadon Makbun for your input.

Since I noticed this first male at Khao Yai, a healthy population of males and 2 females at the stream running through the headquarters, Nam Nao, Petchabun. Here, all the males were perched in extremely darkened areas, about 0.5 metres above the stream. I was lucky enough not only to spot them, but they were willing to let me get some decent photos in their natural positions. 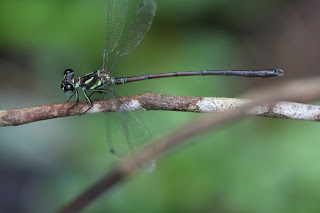 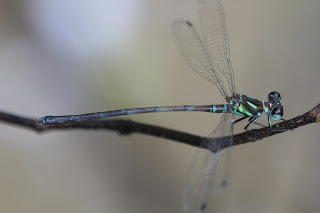 This male decided to set up in the only bright spot along the whole stream. 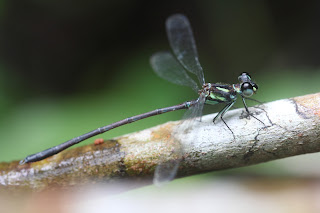 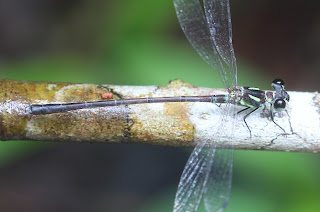 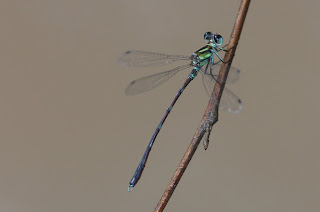 Here, you can see the more yellow/green markings on the head, as opposed to the bright blue variation at Khao Yai. 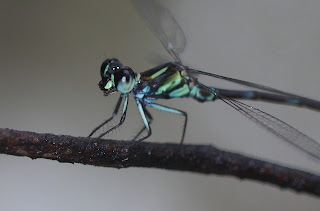 Now in the hand ... and playing dead! 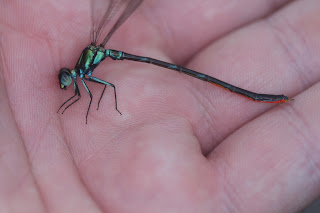 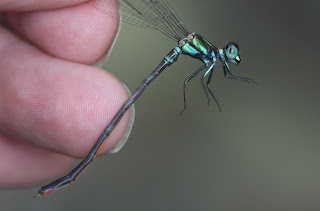 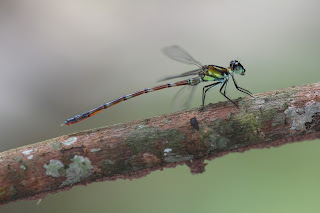 The pimped-up BMW of the R. hainanense world - the males arch their abdomens under their thorax to display their bright colours, when a female is around or when another male threatens their territory. 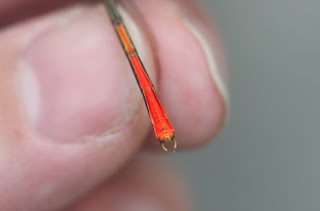 Khao Yai specimen
Here's the male I saw at Khao Yai (July 2011). Almost identical. However, there are a couple of subtle differences (enough to make me think that it could be a sub-species at first). The markings on the head were blue and not green, probably just at a different stage. The caudal appendages are also whitish dorsally, whereas they are blueish on the Nam Nao males. 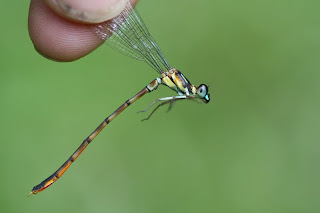 A shot of the Khao Yai specimen's head. The blue markings had a metallic look to them and really stood out. 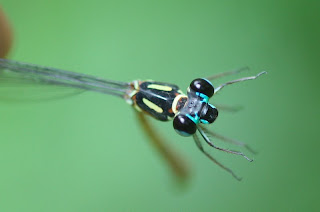 The head from a different angle. 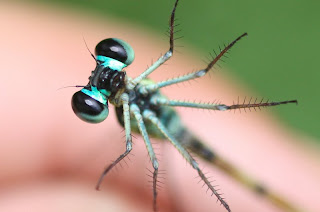 The female (Nam Nao) ...
I first saw a female at Nam Nao in October 2011. However, it was too difficult to pinpoint the exact species. Fortunately, since I have now spotted a number of males, I could confidently identify the female. Furthermore, I eventually managed to get half-decent photos of a female ovipositing at the base of a log overhanging the stream at Nam Nao (see below). Fortunately, I was also able to catch her with my fingers once she had finished ovipositing. 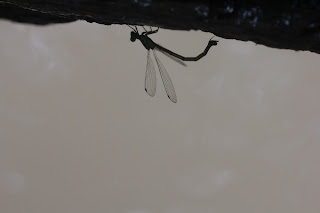 When the flash finally decided to fire, I could see that it was a female and it was ovipositing (you can clearly see the ovipositor protruding in the dark photo). 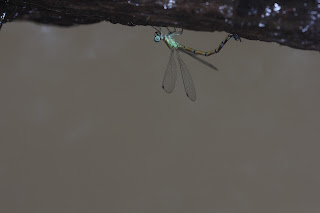 Unfortunately, she was situated right below the scissors of the trunk and I couldn't get a decent photo. This was the best I could achieve in her natural position. 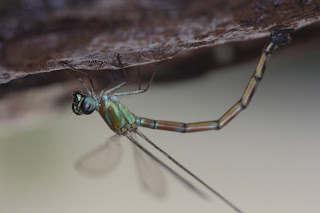 Here's the log where she oviposited (at the base where it scissors). 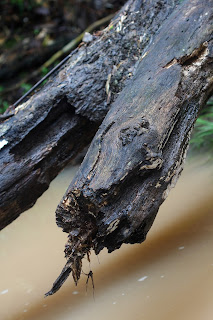 Now in the hand ... I could even be the first person to spot a female, let alone photograph and handle one. 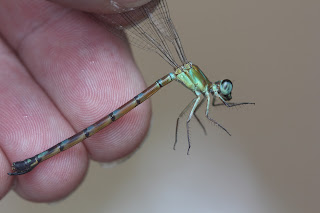 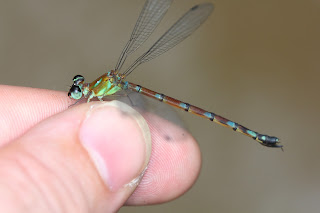 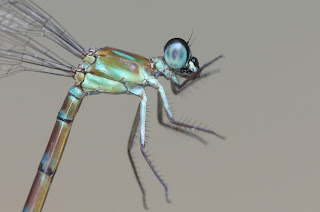 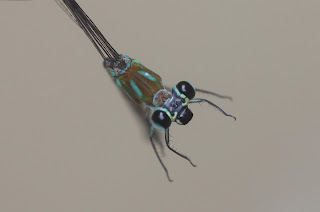 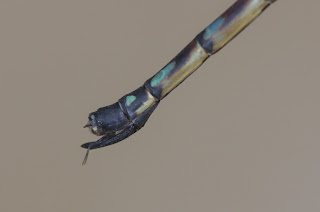 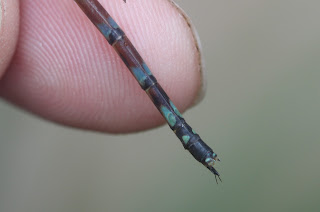 Once again, many thanks to Sebastian Delongee, Oleg Kosterin and Noppadon Makbun for your tireless work!
Posted by Dennis Farrell at 5:48 AM 4 comments: Links to this post