The 7th species of 12 from the Ceriagrion genus, and one I have only just realised I forgot to post! Back in April 2010, I visited Doi Inthanon National Park for 8 days and camped alone... quite literally. I was pretty much the only person there. It was a wonderful place where I encountered numerous new species, and one I will return to for sure. One species I saw fairly regularly in the bushes away from water, was Ceriagrion fallax

pendleburyi
. It's similar to C. indochinense (blog no. 14), which are common in Khon Kaen. However, much of the latter segments of the abdomen are black.

The male
As you can see, the male is similar to C. indochinense, except for the prominent black dorsal markings from S7-10. Caudal appendages black also. 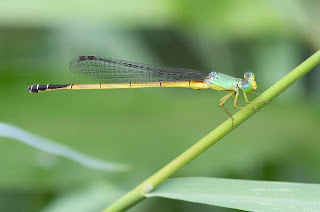 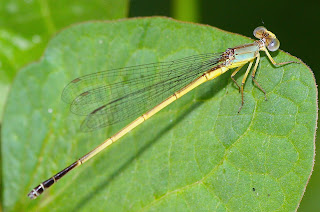 The female
Female is similar to the male, but dull in comparison. Also, the females are extremely shy and fly far away at the slightest movement. 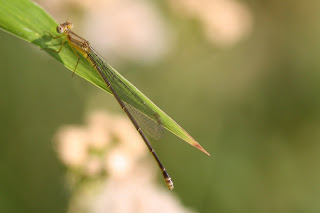 Posted by Dennis Farrell at 5:39 AM No comments: Links to this post