As the song goes, "What a difference a day makes ..."
Actually, it was 21 days to be precise in my case, but the sentiments are there.
From my last visit to Nam Nao Helicopter Pad lake on 4th February, things have changed. No more scratching around for odonata sightings. It was game on from the start ... though the actual start was around 2 hours behind schedule. Somebody hit stop on the alarm and not snooze ... hmmm, I wonder who that was? Anyway, I was in luck as I had my brother's car and could zoom along the A12 after a quick coffee. I arrived just before 8.00 a.m. The sun was blazing and I could see dragonflies already from a good distance. The most obvious were the hoards of Trithemis aurora which had suddenly re-appeared. There were lots of them. In fact, as I walked around the lake and the surrounding areas a large number of the more common species had emerged. Some were fully mature adults and had possibly come out with the warmer weather around a week ago. Still, it was interesting to see such a difference in a matter of 21 days. From very very few specimens to literally hundreds and hundreds of specimens buzzing around, partaking in aerial battles and copulating en masse. It was great to see AND I managed to spot 3 new species that I have never seen before at this location: Rhodothemis rufa (Rambur, 1842), Lathrecista asiatica (Fabricius, 1798), and the biggest surprise for me, Zyxomma petiolatum (Rambur, 1842). The place just keeps getting better and better!
I did, however, have, what I thought, was a large hover fly buzzing around the back of my head. I went to waft it away and caught it with my finger. The bugger stung me twice in quick succession and left its sting in the second time. I never even saw the bee, but my finger swelled up to twice the size and went pink. I couldn't bend it and it made photography really difficult. It is still swollen and sore now.

Here's a selection of my favourite shots:

So, 30 species recorded in just two trips ... and it's still only February. Roll on the rainy season!
Next trip: March (early)
Posted by Dennis Farrell at 6:12 AM 3 comments:

Nam Nao: A Year in the Making (February)

One of my favourite places to visit, is Nam Nao National Park, Petchabun. I particularly love the large, natural lake at the helicopter pad, which is located a snip under 3 kms from the headquarters entrance (coming from Chumpae). I have visited on numerous occasions over the years, and I have spotted a number of rare and uncommon species.  I have probably spotted more species at this one location than anywhere else.
For me, many people visit beautiful places all over the country, taking excellent photos of dragonflies. However, most only seem to visit these places during the peak season. So what happens during the quieter times? Are there simply no specimens there at all? Well, my plan is to find out. For a complete year, I will be visiting the lake (as well as the river at the headquarters) at least once every month. This will allow me to build up an accurate account of what species are around and at what times, covering a whole year.


I will be listing all species recorded (including the common ones) and how often they were spotted each time. This will be built up over the year, with my final trip being at some point next January.


Am I dedicated to odonata or simply stupid? (bearing in mind it's a 300 kms round-trip on my tiny scooter from Khon Kaen). It's a fine line.


So, why is it called Nam Nao Helicopter Pad lake? Well, it isn't. It's just what I have called it. Though, it's easy to see why:


It's a large, open lake, but the weather always seems rather cool. Hence its name Nam Nao: water cool (or cool water, as we'd say). It's located around 900-1000 metres above sea level, though this is a tentative level, as it was a guess by the rangers at the park. I will try to get an exact reading at some point in the future.


Since my last visit, back in September last year, a few things have changed. There is the additional of a small bamboo jetty. No idea why. Maybe to launch a boat, or simply for people to escape being bitten by scores of leeches. Here's what it looks like:


The other change - and a slightly more worrying one - is the fact that someone has tidied the place up at the section nearest the roadside. Everything looks manicured (look at the top two pictures). The grasses and reeds were previously up to about 1.5 metres in height. It was home to scores of rare and uncommon species. This grooming may be done annually. However, I think maybe a Thai V.I.P. of some description made a visit. Hence it being tidy and the addition of the jetty. Fortunately, the rear side of the lake is untouched. Will it affect species population? Watch this space (well, this blog anyway).


Anyway, to the job in hand. Dragonflies. Was February awash with millions of critters flying about the place. Er... no. Were there many species. No, also. Were there many individual specimens. Once again, no. I saw less than 100 specimens in total. Is it a direct result of the changes? I have no idea. Hopefully not and only time will tell. When I arrived (5.45 a.m.), it was still dark and extremely misty and cold. I could also hear large cracking sounds in the distance (probably wild elephants) and I wasn't about to find out. I waited until there was sufficient light (around 6.25 a.m.) until I walked down to the lake. I was hoping to see several new emergences, but there were simply no dragonflies anywhere to be seen at first light.


So what did I see. This time of year here, really is battle of the mini species. I didn't spot any new species. However, there were one or two species there that I thought wouldn't be around at this time of year. One, being Agriocnemis nana. I didn't think that they were around at this time of year. However, I saw specimens at all stages, and therefore I am confident that this species is alive and well here throughout the year. Also, I saw my favourite mini damselfy, Ischnura aurora. I saw two males and a female. 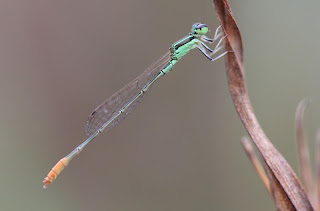 So, all in all, a very quiet day, but gave me the chance to practice with my new equipment ... and what a difference the flip screen makes! There were a few species present, but mostly were in very small numbers. Here's what I saw during the day:

If you think that the helicopter pad lake was quiet, then the headquarter's river will send you to sleep.
It was the quietest time I have ever had in the field. Extremely low light and cool and the river was slow, almost plodding. The dragonfly sightings were even slower. The At the entrance to the river, I saw a female Lestes elatus. This was follwed by 5-6 male and female Aciagrion pallidum. And that was basically it. I walked for over two hours to no avail. Evenutally, I spotted 1 male Coeliccia poungyi, followed by a female about a kilometre away. I also 3-4 teneral specimens, which I am convinced were the same species. And that, literally was it, apart from a few individual Copera species disturbing an otherwise silent walk. It surprised me just how quiet the place is at this time of year ... roll on October!

Here's what I saw during the day:


Here's a couple of things I spotted along the way:

To say I have recorded well over 50 species from these two locations combined, it was a rather quiet time ... I wonder why those cameras are packed away at this time of year??? Hmmm ...