A patch of green with a little potential

Being a little tired of visiting Phu Khieo WS, Phu Wiang NP and Nam Nao NP, the opportunities for day trippers (pretty much all I can afford right now) leaves me a little limited. Living in Khon Kaen is a real bummer when it comes to visiting great places. There are quite a few places a little further out but they take around 4 hours to get to so would make it an incredibly long day and a night's stay would be much better (I am keeping a lot of them for the future). Anyway, there is one place that I need to do a lot more work at as it seems to have a lot of potential -- if you can get into the forest that is! I am talking about Phu Phan National Park, which is in in Kalasin and Sakhon Nakhon. We decided to tackle the Kalasin end (it is closer). Though it is lowlands, parts of the forest are lush green and very inviting. However, the problem is finding anywhere to search. Anyone who has driven through it will understand. It is just one long windy road where cars go incredibly fast and there are few opportunities to stop (there was a very large truck hanging over the edge to give you an idea). I did, however, notice a sign for a waterfall (which I managed to visit with my brother, Paul). It was a slightly tough downhill and slippery walk to the stream and I think both of us went over at least once. The stream itself looks absolutely perfect. Shallow, rocky and sunny areas with a permanent and shallow stream with lots of puddles everywhere. It was early but I was already dreaming of seeing new and exciting gomphids flitting from rock to rock. I couldn't believe how good it looked! Looks, however, can be deceptive. We searched the area and there were only hundreds of Trithemis aurora and Trithemis festiva everywhere. A little more searching brought one specimen each of Orthetrum pruinosum neglectum, Orthetrum chrysis and Prodasineura autumnalis -- the only damsel I saw there! And that was it. Even Paul was bored of seeing the same dragons everywhere. We waited around for a good while but, after getting stung above the knee by a bee -- much to the amusement of my brother -- we decided it was time to move on. I will return very soon and much later in the day.

So, we went to the Phu Phan National Park Protection Unit which is just inside Kalasin. This was a place I ha visited before but late in the year so wanted to see what was around now. The first location was a heavily weeded pond that was swarming with common forest pond dwellers last time (in September a few years back). However, this time, it was a lot shallower and seemingly had completely different species. Oddly, other than the usual suspects you find everywhere, the most common species was Camacinia gigantea. There must have be 25+ individuals ALL constantly battling above the pond and surrounding swampy area. It didn't seem that any would ever land. However, I was happy to see four males suddenly plonk down in the taller grasses about 30 metres away... I crept up on them and... they all shot off straight away. Damn! I then put my brain into gear and decided to move over to some steeper banking with loads of branches and bits sticking out as I expected that to be a favourite place for them to rest. I waited about 10 minutes and amazingly my plan worked! A couple landed very close by and I managed to get my best shots yet of the male (I do have great shots of the female somewhere). Though most other species were common, I saw a few Ceriagrion indochinense, a fleeting glimpse of Indolestes anomalus (1 copula), Tramea transmarina euryale and 2-3 Anax guttatus bombing around (but no chance of a photo). So, I was happy seeing that little bunch.

But with the sun being incredibly strong, I was starting to wilt and decided it was time to move on again. We searched a few areas that proved fruitless and then settled on a tiny but beautiful stream that I had visited once before. This time, however, it was bone dry. It was clearly just an overflow from the pond I had just visited. So, I should have just gone, yes? Naaa... I was there so thought I would give it a go. Straight away, I could see Vestalis gracilis staring at me everywhere, which perked me up -- though I was too lazy to try and photograph any. I ventured a little deeper and into almost darkness and a Gynacantha sp. dropped from its perch and landed a little further away. Not surprisingly, it turned out to be Gynacantha subinterrupta (it is the most common species in the genus and I had seen several specimens there last visit). However, my brother started shouting me over so I left it and went to find him. He could see a small damsel moving around in the gloom. I got a fix on it and just thought Coeliccia didyma (very stupid of me to assume). I got in a few record shots and it shot off... chased by a second male. It was only when we left and I looked again at the photos that I realised that it was NOT what I thought it was. I am pretty confident that it is Coeliccia nigrescens, only known from two other locations... one being Nakhon Nayok in Khao Yai where I managed to see it so this is a great find indeed. Well spotted, Paul! However, I need to return to get improvement shots as it could possibly be something else (hopefully). Searching the darker areas a little more I noticed another Gynacantha specimen. But this one looked a little different. I edged forward and after a few quick shots I knew what it was: the rare Gynacantha phaeomeria, male. It's a species that I once recorded in Loei a few years back. So I was really happy to see it again and this was a fully mature male! And that was it, really.

On the way back from the dry stream, my brother got smashed by about 20 paper wasps that attacked him as he got too near the nest. As he ran and I laughed, I also had to leg it as I was hit right on the chin and about four times on my legs. Seriously painful stuff (especially my chin). Paul felt a little sick afterwards. What a softy haha!

So, not bad at all and I am going to return next weekend (I can't this weekend as I have to attend a stupid seminar in Bangkok). So, watch this space for part 2!

Best photos of the day:
Gynacantha phaeomeria, male -- a rare and beautiful species... but sadly loves very dark areas. This took me an age to get the right shot. 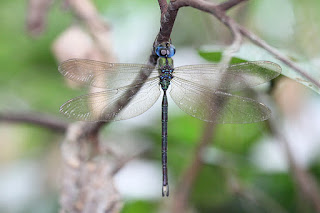 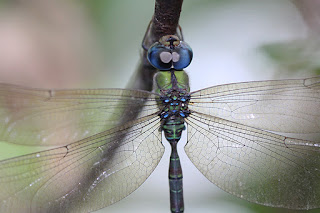 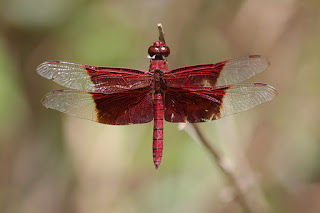 Coeliccia nigrescens, male -- terrible shot, but you can see why I thought it was C. didyma (it was seriously dark) 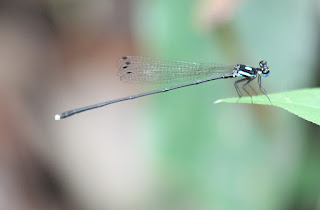 Gynacantha subinterrupta, male -- gotta love those colours and the dark patches on the synthorax... very strange. 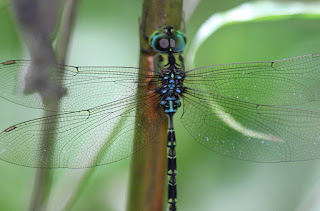 Ceriagrion indochinense, female -- must be a teenager with a spot that big! Haha (it's actually a parasite). 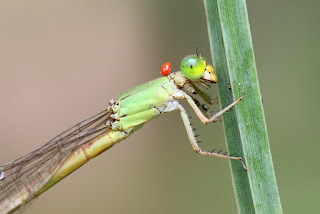 Trithemis pallidinervis, female -- very common but I haven't taken a photo of one for years! 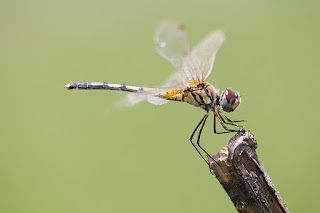 Brachydiplax farinosa, female -- the males are very common but you don't often see the females out in the open! 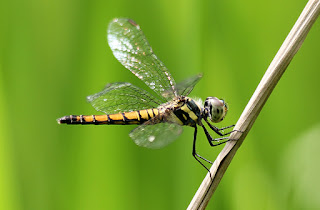 Other things I saw... mushrooms don't usually do it for me but these are simply beautiful! 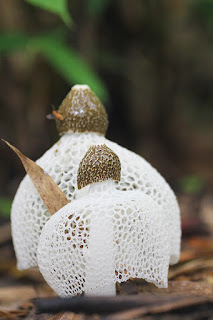 They may be small, but they are seriously beautiful... The Green Dragontail. Quite common and they love warming up in the early morning sun. This shot is uncropped. 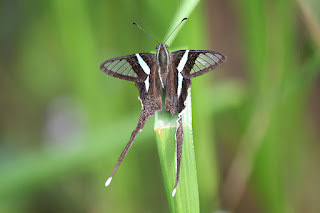 Posted by Dennis Farrell at 6:21 AM No comments: