This is Sympetrum hypomelas. I have only seen this species at the top of Phu Kradueng National Park. If it is rare, it certainly isn't at that place... they are everywhere. The males are seen at every little pool of water and the females can easily be seen if you look in the bushes slightly away from the water's edge.
More recently, I have spotted this species at two other locations, though in lower numbers than at PK.

The male
Really easy to spot with it's bright red thorax and abdomen, with distinct black and yellow markings on the thorax. It really is a beautiful dragonfly. The young males are yellow. 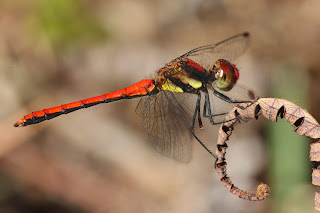 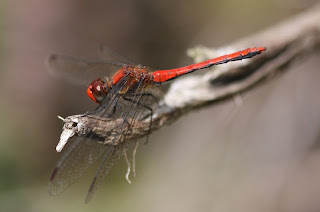 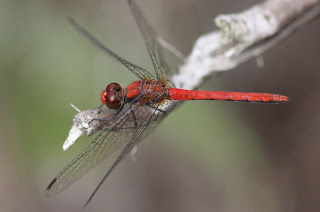 Caught in the act...
This male simply didn't move and I was able to catch him easily with my fingers. Here he is held by my patient girlfriend, Beau. No dragonflies were hurt in this production ;) 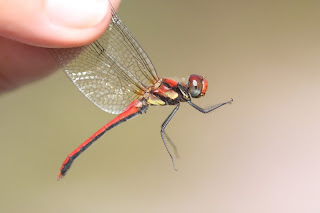 The female
Very similar to the male, but more robust and has more prominent markings along the abdomen. Like the male, the young female is yellow. Many can be spotted if you look slightly away from the water's edge. 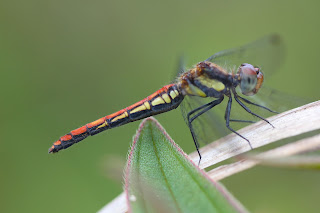 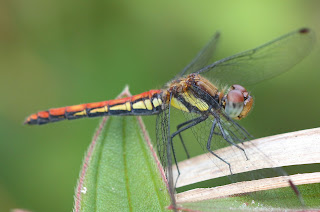 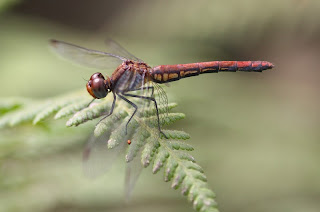 I have visited Phu Kradueng three times, Twice in October and the other in December. Each time, there were lots and lots of specimens present. I know Noppadon Makbun has spotted many there too as well as certain places in Chiang Mai.
Posted by Dennis Farrell at 2:40 AM