First up... a lovely little damselfly: Aciagrion approximans (species has been updated for Thailand). It is a small damselfly that likes to fly just too far away from you when you try to photograph it.

The adult male
The male is instantly noticeable. It has its black stripes on a blueish-purple synthorax. The ocular stripe is also blueish-purple as is S8-9 on the abdomen. Abdomen and caudal appendages are black. The stigma is black. 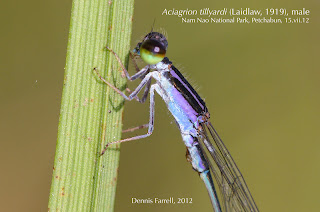 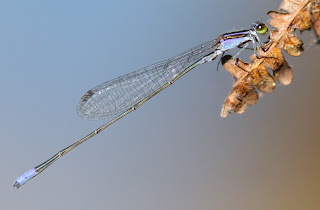 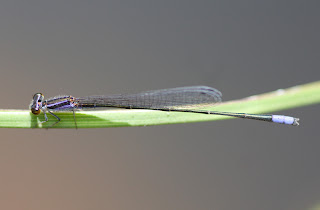 Close-up photos of the male appendages (especially the lateral view) are key to identification of this species. 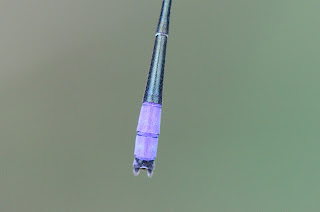 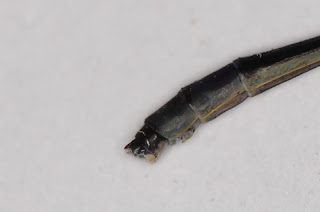 A young (sub-adult) male
These tended to hang further back from the water's edge in the nearby bushes, not near the adult males. 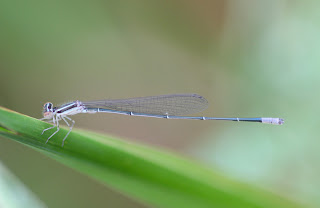 The female
The female is similar to other females of the same genus. It is easily identified, though, as it is often found close to the males. 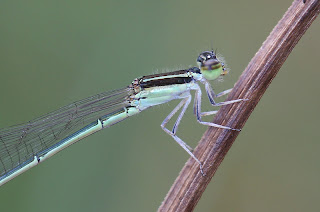 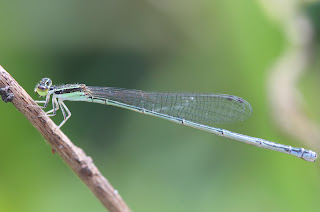 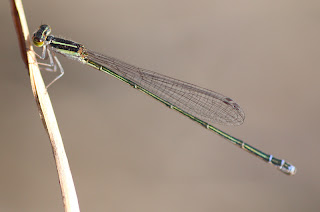 A young female
At this stage, they tend to hide at a good distance from the water's edge - it took me a while to find one. 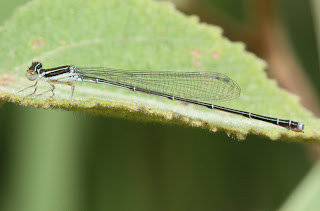 A copula (the female part)
You can clearly see the female sex organs (technical term???) protruding just before it attaches to the male. The male is part shown (attached) in front.

A copula (in tandem) 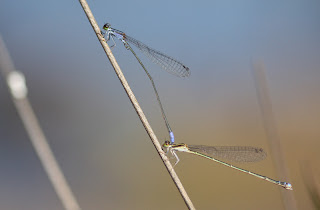 A copula (in a wheel)
I saw many copula in December at Phu Kradueng. Looks like the perfect love heart. 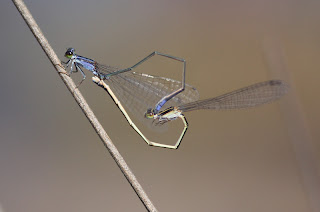 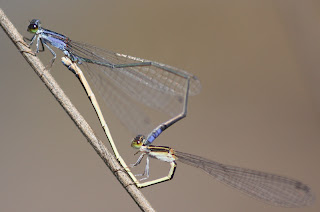 Ovipositing
You can see how the male is pushing down on the female and she is now virtually underwater. 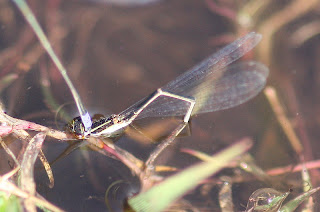 Ovipositing
Now the female's head is completely submerged (about 1 inch down) in order to oviposit (lay eggs) further down the stem of the weed. I have no idea if this is a one-off or normal procedure for this species. She was held under for around 1 minute, before the male flew off with her. Maybe that is the normal time, or maybe I disturbed them being so close. The female was perfectly fine afterwards. Not the best photo in the world, but it was really hard to focus underwater. 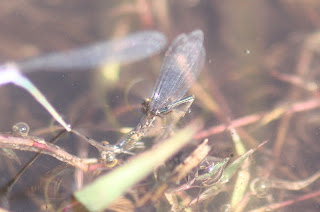 I have seen this species at a number of places, Doi Inthanon (Chiang Mai), Nam Nao National Park and Phu Kradueng National Park (Petchabun province). It is an uplands species, that likes to live close to the edges of ponds, lakes and very slow moving water. I haven't seen it at many places, but when you find one, you'll find lots. It is very common at Phu Kradueng. It is around all year, and I have seen them in April (Doi Inthanon), all year (Nam Nao) and October and December (Phu Kradueng).
Posted by Dennis Farrell at 12:27 AM