Another Vestalis species I managed to spot was Vestais amethystina. However, unlike V. amoena where, if you found one, you found several, this species was in seriously low numbers. Maybe it was the wrong time of the year or they were just out of sight that day. I did manage to spot two males along a short and manicured trail that runs near the river at the research centre. Looking through bins I could clearly make out the 'V' nick in the appendages but my shots of the appendages are not so clear. I also found this species to be far more skittish and it took an age to get the shots I got... so I am happy for now. I can find this species in Kanchanburi down, so I should see him again someday -- and I really hope to spot the female too as she eluded me this time round.

The Male
The male is exactly the same as V. amoena and can only be separated by its appendages. However, I wonder if they like slightly different habitats? 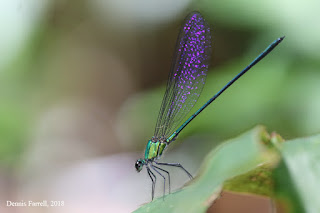 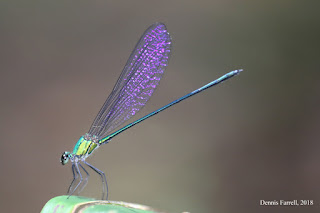 The Appendages... you can just about make out the 'V' nick in the superior appendages (if you look carefully enough). 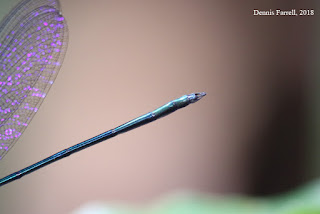 Sadly, I didn't get to see the female this time...

Posted by Dennis Farrell at 6:23 AM