Halfway through the morning of the first full day, my camera packed up. I was gutted, though it was probably my fault (I had been swimming to get a shot) and I think a little water trickled down my wet sleeve and managed to get into the battery compartment (however, it seemed to work later--see full article on Hala-Bala which will be posted shortly). So, one morning was traipsing behind the birder group I was with. It was, of course, interesting as I learnt a little about some of the birds there. However, I was champing at the bit to get on with dragon hunting... way behind my brother, I heard him call out. I ran (well, rather hobbled as 'stiffleg syndrome' had set in from the previous day's walking). Anyway, as I reached him I could already see a solitary red dragonfly perched on a stick at the edge of the path. I knew straight away that it was Lyriothemis sp. and a new one at that for me. However, armed only with a 100-400mm lens and set up for birding getting a shot proved tricky. So, between me and my brother we fired off a few shots and this one was the best that came out. Turns out to be Lyriothemis biappendiculata, male -- a species that has been reported from a few places including Khao Yai and so I hope to see it again one day, especially the female as it looks so cool. 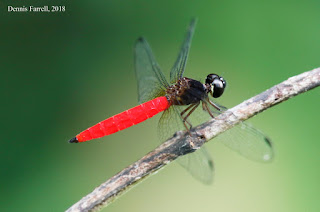 Anyway, thanks to my brother, Paul, for the use of his camera in my time of need and for even potentially taking the shot!!! Turned out quite nice, really.
Posted by Dennis Farrell at 3:26 AM