Back in 2008, I was sat having a beer late afternoon and a male Diplacodes trivialis (I had no idea at the time what species it was) plopped right down in front of me. It then flew off and a few moments later, returned to the exact same place now with a small fly in its mouth. Watching it 'ball up' its meal I was transfixed and have never looked back since...

Well, after a full ten years, I have FINALLY got myself 200 photographed species from within Thailand. I have, of course, seen many more but actually getting decent quality photographs that can be used to ID species is another story. Also, by factoring in living in Khon Kaen, being a teacher (so limited budget and very limited time), and doing everything totally by myself (99% of trips have been solo missions, though my brother and a few others have made my trips better in the last few years) is rather impressive if I may say so myself. That's not to say that I haven't had any help... Noppadon Makbun, Oleg Kosterin to name but a few, as well as amazing help from the dragon hunters on Facebook's Dragonflies of Thailand. I could go on, but if I haven't mentioned you, please know that I appreciate the help... and may need it again somewhere down the line. Some of the species are yet to be identified (by science) but I am happy that they are at least separate species. I have a few more to add and a few that I can't add as I simply can't ID them or the angles are all wrong.


Anyway, onto the 200th species... and a special one to say the least. All Lyrithemis species are rare and hard to locate, even if you know where they are supposed to be. And Lyriothemis cleis is no different. It is a rare species that I was simply incredibly lucky to spot near the waterfall at Hala-Bala WS. However, it didn't all go swimmingly... well, I went swimming to get good shots of Dysphaea dimidiata dimidiata and that seemed to be the killer blow!

Anyway, as I was waiting around for the birders to turn up I saw a dull red dragon right in front of me. It was perched on a frond in the early morning sunshine which was poking through the tree canopy. I knew what it was straight away but one shot (that didn't come out) and my camera packed up. Aaaarrrggghhhh!!! Dead. Nothing. Now't. I knew the birder gang was about 100 metres away so I had to run to them grab my brother's camera, switch over the lens and then run back... a man had just walked past and it was gone... I was knackered, sweating and pissed off on several counts. No dragon and my camera was dead. I WASN'T giving up. I searched the whole area but it simply wasn't there. However, out came the sun and, with it, came that dull red dragon once more. Now, I was ready... plenty of good shots and it was in the bag. I was soooooooo elated until I walked back to the birder boys who were inspecting my camera... and then the realisation sank in: my dead camera. To cut a long story short, however, 24 hours later it started working again and it was game on again!

The male
The male has a dull red abdomen and also has distinctive yellowish stripes on the abdomen. 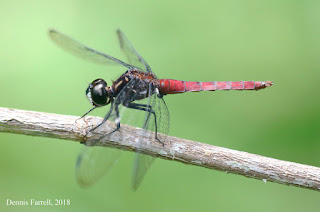 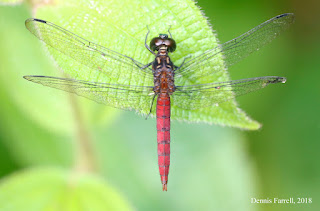 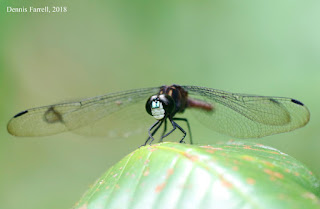