So, with a new month comes baking heat again... and a new species. Microgomphus thailandica is a species that I knew resided at Phu Khieo as it had already been recorded there by Andrew Pierce. However, for some reason, it had managed to evade my lens for over two years. Finally, last Saturday, I was trawling along the stream bed of a narrow, dull stream noting a few common species, when my eyes focused on a little gomphid staring at me from the top of a frond. I edged towards it and flew about five metres from where it was and into blinding sunshine. I edged forward again and this time managed to fire off a few photos before it flew high up into the tree canopy. Though I wasn't entirely sure I had a new species for my records in the bag at the time, it only took a few minutes research at home to realise that it was, indeed, another species. I was clicking my heels with excitement, I can tell you! I will be returning soon to continue my search along these murky, relatively under recorded streams and hopefully can find a more cooperative male as well as a female and a host of other species.

The male.
The male, seen here basking in the baking heat, looks similar to many other small gomphids but can be separated by its unique appendages (just visible in the second photo where it kind of looks like a mini 'OK'). I will attempt to catch one next time for a close up of the appendages. 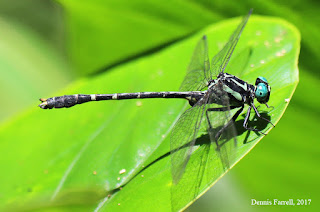 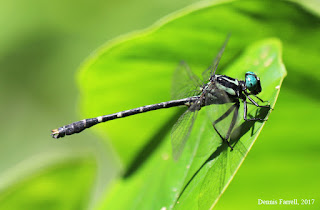 Posted by Dennis Farrell at 1:11 AM