Well, two trip to Phu Khieo WS in August yielded totally contrasting results. The first trip with my brother, Paul, was to another section of Phu Khieo WS. It was at the southern part of the park and was at a low elevation of just 280 m.a.s.l. The journey there was the most adventurous part, however. Once we hit the dirt track everything seemed fine and the excitement was building, as too was the pressure of my brother's guts! However, a few tissues lighter and around 1 km outside the entrance, the road seemed to have collapsed slightly due to flooding. And, being in my crappy Toyota Vios, attempting to scale that section seemed like a stupid idea, even though we considered it for a good while. Anyway, experience and common sense prevailed thankfully and we hot footed it -- rather, we dragged our fat carcasses -- along the 1 km section which turned out to be a good idea as it was pleasant under the tree canopy stopping en route to see the odd thing or two. We eventually hit a narrow stream which went right across the path and so the car would have been written off anyway. Here, there was clear indication that some serious flooding had recently abated as the tall grass was all flattened and debris was strewn everywhere. Here, I saw a few common species including a large number of Vestalis gracilis. Photo opportunity for later maybe. Eventually, we found the main stream... and it was belting through. Not a chance to get anywhere near it and was difficult to get anywhere along the edge. Other than a few more common species and V. gracilis seemingly watching our every move, there was nothing to report, other than the river has serious potential when the time is right. I am looking forward to returning there. On the way out, I took a few shots of common species but was a little surprised to spot a solitary male Pseudagrion pruinosum hanging on for dear life in the fast-flowing stream. Though I have seen this species at the top of PK, I was previously unaware that the species resided at such a low altitude. Anyway, that was about it but is definitely a place I will return to one day.

Photos of the day (though very few):

Pseudagrion pruinosum, male. A solitary specimen hanging on in there following the floods. 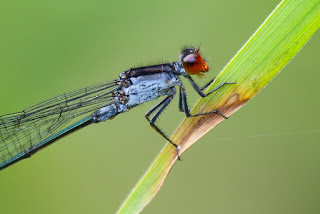 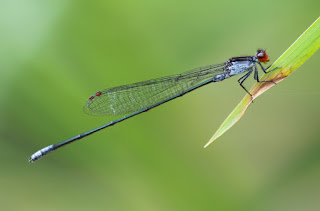 If you have ever seen the film The Birds, you will know what I mean... Vestalis gracilis seemed to be watching our every move from the gloomy backdrop. Here is a female. 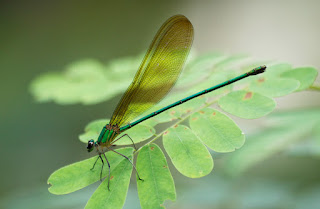 An unfortunate ending for this male Orthetrum chrysis... this spider was in the exact same position several hours later. Must have been really tasty. 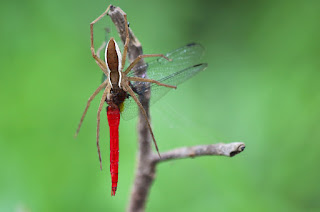 One other point of interest was the sheer numbers of butterflies that resided there though my attentions were firmly on dragons... though maybe a trip there next April. Here is a Banded Swallowtail. 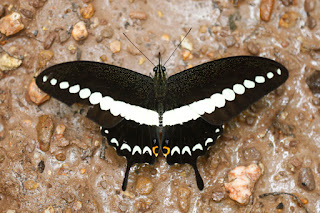 The following week, it was back to my usual hunting ground, but searching deeper into the forested streams. Initially, it was the usual suspects at the ponds but the noticeable difference from the previous trips was the distinct lack of numbers flitting around. This was due, in part, to the oppressive heat that was causing everything to wilt -- including me and my brother. However, with the heat, came brighter sunshine. The streams were game on (they are usually seriously dark). Other than the main stream, there are around 5 smaller streams that you cross en route to the top. I will be searching these more in depth when the time is right (sometimes it is difficult to navigate them due to too much water flowing through or they are like puddles). Anyway, I spent a short time at each of them to get a flavour of what is there. One of the most noticeable things is the fact that they so quiet. Other than a solitary male Tramea transmarina euryale at a pond and a number of Rhinagrion viridatum punctuating the silence (which I saw here for the first time last season), it was quiet... but not completely. There were several distinctive male Merogomphus pavici, which I saw for the first time at the place. I managed to catch one and was going to take a photo of it when I slipped and dropped it. Never mind. Still, it's a new species for my personal list at the place. Plus, I have good photos of the male and female from Nam Nao anyway. Then I bumped into a very strange little dragon. From a distance, I had no idea what it was, though suspected it was Brachydiplax farinosa, female though it was deep along a stream and was quite red. I did manage to get a photo of it and Noppadon Makbun believes it to be a female Amphithemis curvistyla. Annoying as I should have realised this, though the markings are very similar. I just wish I could have got a better photo (it shot off up into the tree canopy as soon as I fired the first shot, which is not that good). Still, onwards and upwards and I am going to return in a few weeks to try and get better shots of both male and female. I kept searching and kept on bumping into R. viridatum and M. pavici, but not much else. Eventually, at a stream that I have search before but to no avail, I spotted a small Gomphid. I was instantly excited. As soon as I moved, it flew to another leaf right in the sun. I managed to fire off a couple of half-decent shots of it before it, too, flew high into the tree canopy. I wasn't entirely sure whether or not it was a  new species for me, but once I returned home it was obvious that it was a male Microgomphus thailandica, a species that fellow birder/dragon hunter Andrew Pierce had already recorded several males at a stream further down the hill though they were not there when I visited this time around. So, another species for my records both personally and at for the location. Great! After that, however, things started to go downhill. Both my brother and I were wilting in the extreme heat and everywhere was quieter than usual. I did stop off at a couple of my favourite ponds on the return leg and one that was slowly drying out was now buzzing with dragons. There were several female (no male) Lyriothemis sp. dropping down from the canopy, ovipositing and then returning high up without giving me a chance to catch them. Likewise, Lestes dorothea and L. praemorsus decipiens were present, as too were Orolestes selysi and O. octomaculata. I saw a very strange looking (probably) O. selysi male and even stranger female Lestes species ovipositing onto weeds in the pond though the solitary shot I got was facing the sun and it flew away as soon as I approached. Moving slowly around I disturbed two Gynacantha specimens, I followed one and it turned out to be Gynacantha subinterrupta which perched at the very base of a tree. I also managed to spot my first female Archibasis viola though it was incredibly skittish and wading like an elephant and crashing through branches didn't help. Other than an awful record shot it, too, disappearing into the gloom. Next time, you are mine!!! Ceriagrion pallidum seems to have disappeared already, though this could be because of the heat and will return next to time to try and find it again. So, that was about it. The good, the bad and the ugly of dragon hunting. Looking forward to/dreading my next trip (delete as applicable).

Introducing Microgomphus thailandica, male -- a new species for my records. 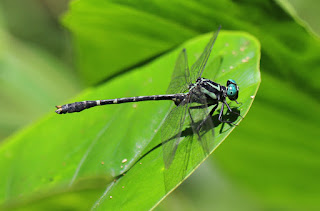 A welcome start to the day with a somewhat approachable Tramea transmarina euryale, male basking in the oppressive heat 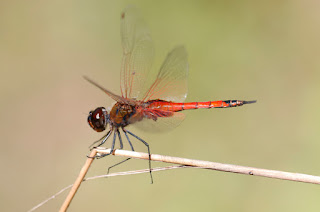 Female Paracercion (calamorum) dyeri -- numerous males at the ponds near the main river, but this is the first female (not part of a copula) I have photographed. 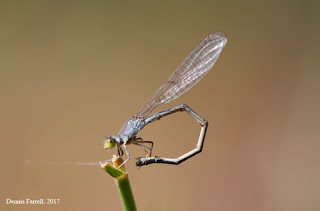 Another nice female...Orolestes octomaculata, ovipositing into a stem overhanging a small pond. 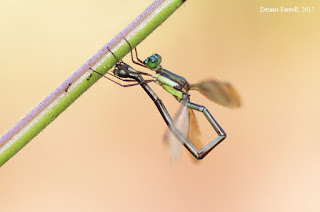 Gynacantha subinterrupta, male resting at the very base of a tree. 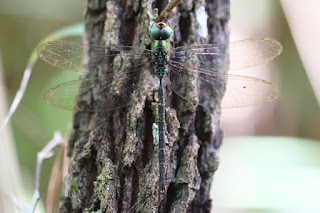 The best shot I managed to rustle up of the several Lyriothemis sp. females that kept dropping down from the tree canopy and ovipositing before disappearing again. 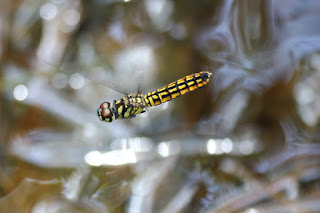 ... and now for some 'not great' shots. Here is the female Amphithemis curvistyla... my first sighting of the female (and now i know what it looks like). Thanks for the ID, Noppadon Makbun! Sadly, there is too much flare for my liking. 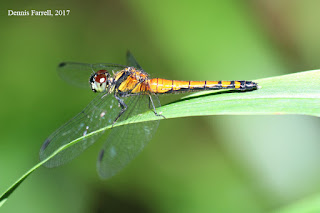 Here is an Orolestes species high up in the tree canopy. O. selysi or O. octomaculata? You decide. It is likely to be a young male O. selysi though the black markings seem to be too short. 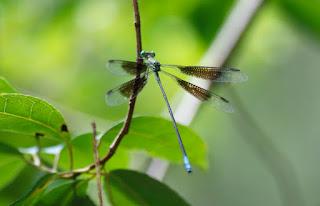 And, as if not to confuse matters, this poor shot (facing right into the sun and didn't get the chance to shoot another) here is a very strange female Lestes ? species. It was the size of a typical Lestes species, but the thoracic markings (or lack of them) don't suggest any of the species that reside at the place. Any suggestions, anyone? 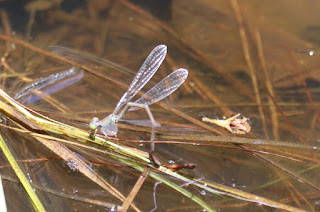 And just to finish... here is another strange-looking grasshopper. Seems that they have taken over the mantle from the frogs of last year! Any suggestions on ID would be more than welcome. 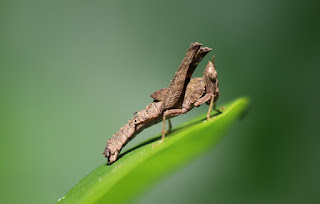 Posted by Dennis Farrell at 8:45 PM