A few weeks back, a birder called Andrew Pierce I knew, decided to take a trip to Phu Khieo on a dragon trip. He saw several of the rare gems that haunt PK but was light on one or two. However, he also saw another species that he couldn't work out what it was and posted on Facebook (Dragonflies of Thailand). The majority of feedback suggested it was Archibasis sp. but the lighting and angle of the shot made it difficult to be sure which species. When I saw the photo I was amazed and, in all honesty, it kick-started my dragonfly season. Not that I hadn't wanted to get out there, but I have been so busy working and the weather has been awful so it has been all too easy to kind of turn a blind eye to the hunt. Anyway, he asked if I wanted to return and so we did the following Saturday, along with my brother, Paul. I have been to almost every ditch, pond, stream and lake there... but I had never come across Archibasis. We eventually landed on the small heavily tree-lined and dull-looking pond that was situated very close to a stream. Amazingly, it was already there. There were 2-3 males but were extremely skittish at first. As they settled, I managed to get in a few decent shots and Andy also improved on his own shots. It was clear that it was Archibasis viola, though it did take a little more research later on in order to be 100% confident as it is primarily known as a southern species in Thailand stretching only as far north as Chantaburi. The pond itself looked almost like any other pond I had visited, though this one wasn't on my radar as it looked devoid of life... not anymore!

What is also interesting is the fact that this is the rarer of the two species likely to be found in Thailand away from the south and A. oscillans (being the other) has been reported from Nakhon Nayok, but seems to prefer streams to marshy pools so there is every chance I may find this species too at Phu Khieo. Anyway, I need to return to find the female... watch this space. 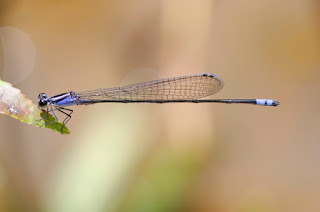 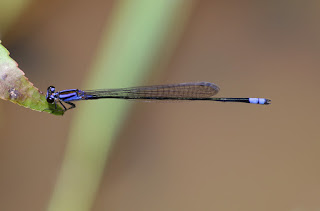 For the record, I would just like to thank Andy Pierce for guiding me to this species as it would probably have taken me many more trips before I fell upon it (if ever). Thanks, matey!

Posted by Dennis Farrell at 1:30 AM