All Doom and Gloom at Phu Khieo

Following a few great sessions at Phu Khieo, this one turned out to be a bit of a stinker. Though it hadn't been raining that much throughout the week it decided the weekend was a good time to start. Moreover, the water level of many of the ponds and streams had increased dramatically. Unperturbed, I was determined to hit all of the streams that I had visited sporadically in the past with little success. However, upon arrival at around 9.00 am, it was apparent that it was going to be a tough day. It was seriously dull all day with heavy cloud cover dampening my spirits even before the heavens opened. The first place I stopped was at the larger River Phrom (the main river at the lower section). Here, there were several very common species flitting around. Nothing much to report, except a solitary male Euthygomphus yunnanensis (formerly Merogomphus parvus) was sunning itself on a large frond though it was too far down to get a photo -- saw it through my bins). Moving on up, the heavens opened and I simply had to wait in the car until it subsided. I then hit the first stream and it was pretty dismal. Other than a couple of male Heliocypha biforata flicking from rock to rock in the open areas, there was a depressed-looking Coeliccia didyma didyma shrouded in gloom. Sadly, this seemed to be the theme of the day: gloom. I even switched to a couple of my favourite ponds and they, too, were seriously quiet. Only very common species and a couple of old-looking Lestes dorothea were moving around in the reeds. Before I knew it, I was at the top and even at the ponds there it was seriously quiet. A solitary Indothemis carnatica was perched on the path but even he shot off as I approached. Looking deeper, I managed to spot a fresh female Rhyothemis obsolescens -- something of a rarity around these parts. I have bumped into the male a couple of times, but this is my first female. Though it rained for most of the day, I did manage to enjoy a couple of hours of semi-light. Stopping off at as many places as I could, I managed to spot a female Rhinagrion viridatum for the first time at the place at the stream where I saw Microgomphus thailandica last time out (though all gomphids were either not around anymore or were simply hiding out of sight as it wasn't hot or sunny enough. I also saw a teneral male Agrionoptera insignis insignis starting out life at a pond opposite to where I saw Archibasis viola, though that has all but disappeared now. I was happy to see a solitary male Orolestes selysi still hanging on in there--just like me for the day. However, more interesting than the species I saw, this time it was the behaviour of a male that piqued my interests by doing something very strange. I was happy to spot a copula of Euphaea ochracea. Nothing too strange about that, other than it is pretty rare for me to see a copula of this species. Anyway, the copula split (as I was taking photos of it). However, when the female landed, the male simply landed straight onto her wings facing the opposite direction. I tried to get a photo but they were too high up and I spooked them. Fortunately, they didn't fly too far and the female landed a little further away and lower down. Again, the male simply landed on her wings and in the same way. Again, I tried (and failed) to get photos. Luckily, the next place the female landed was on a large leaf that was enjoying a short spell of sunshine (about 30 seconds). To my amazement, the male landed on her wings for a third time and I managed to get a couple of OK photos! Shortly after, they flew further upstream and the female went straight into the stream at great speed -- something I have seen several times. However, I can only assume that it was a way for the male to guard the female from other males as her body produced/fertilised the eggs. It was a great thing to see.
By the time I had got down to the bottom, it was pouring it down and, with it, my spirits were well and truly dampened. Still, there's always next time... somewhere else, I think.

Best photos of the day:
Out of the gloom shone this lovely teneral male Agrionoptera insignis insignis 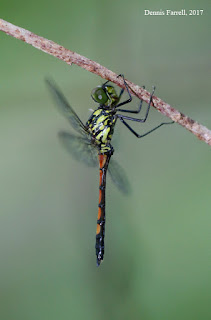 My first female Rhinagrion viridatum sighting at PK (though I have seen it at other places). 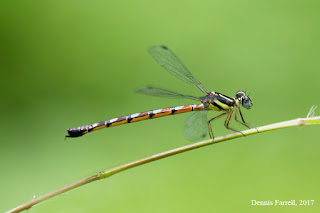 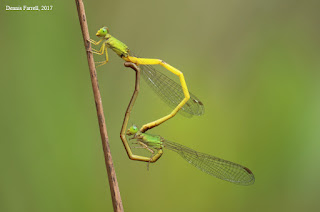 A few years ago, I was desperate see this species. I am happy that it can be found not too far frommy home. One of my favourites... a fresh female Rhyothemis obsolescens 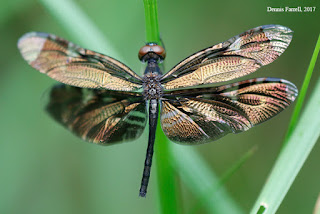 Seriously common, but all too pretty to pass up when they land next to you -- Heliocypha biforata, male 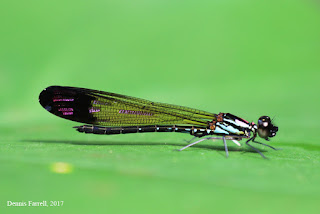 Not the commonest of slights at PK... a female Mortonagrion aborense. This one with a ball for breakfast. 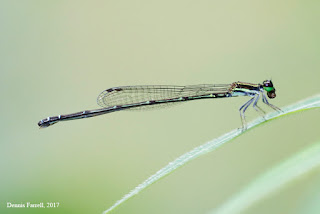 Neurothemis fulvia, male. Seriously common and always ignored... you can tell it was a quiet day. 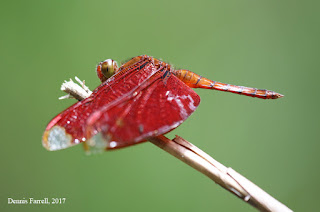 Highlight of the day. Once this wheel of Euphaea ochracea had finished copulating... 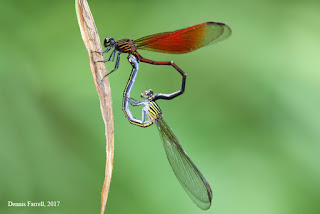 ... the male constantly landed on the female's wings in this way. Maybe a way of stopping other males from getting in there??? Any ideas? 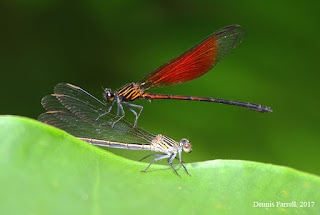 A bat and a bird...
This bat was taken with the moon in the background.... haha. Seriously, it was roosting in the middle of a concrete overflow pipe. It was a large bat too. Looks pretty cool, I think. 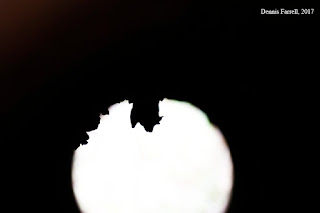 A lovely kingfisher that I was happy to get using a macro lens!!! 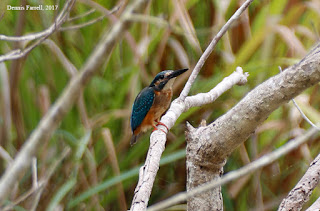 Posted by Dennis Farrell at 2:33 AM