Finally, after searching for it for a long time, I have found it. I think. Lestes dorothea has eluded pretty much everyone (many of the guys on Dragonflies of Thailand on Facebook) including myself but the help of identification through the female has helped for once.

The major problem is that the males of L. praemorsus and L. dorothea are almost identical in appearance.  I knew that both species had been recorded at Phu Khieo previously and I did notice that the pruinescence at the end of the abdomen on some specimens was significantly reduced when compared to others. Conclusive proof? Of course not. Worse still, the appendages are almost identical (from what I could tell anyway). This was also noted by Tom Kompier on his blog with information that has helped a lot on this. The telltale difference (I am led to believe) is the difference in the female. The female of L. dorothea has the bold markings on the thorax (like a swoosh) followed by another prominent dot. This is the same as the male but is almost always hidden. Again, this was pointed out by Tom on his blog and Noppadon Makbun also explained this to me, though still would like to compare the appendages. Looking back at both males and females, the latter is now easy to separate (see comparison below). However, the male is still a little difficult to separate, but I will have to entrust the expertise of others for now (unless I can find a very young male for easy comparison).

The male:
Though I could be mistaken, from memory it is a slightly larger species than L. praemorsus. However, the key to identifying the male is the reduced pruinescence at the end of the abdomen (see comparison below). 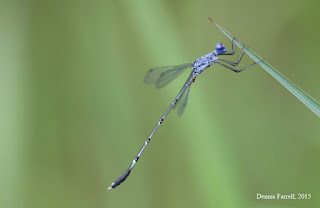 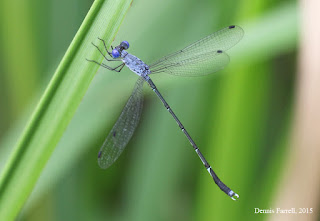 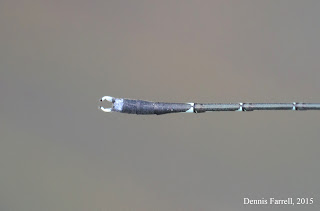 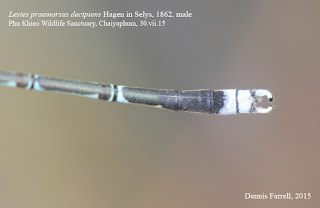 L. dorothea, copula in the hot afternoon at Nam Nao 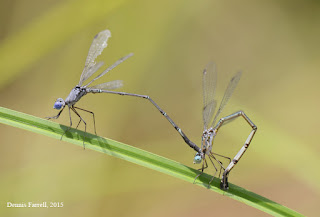 L. dorothea, the same female (not the prominent markings on the thorax) 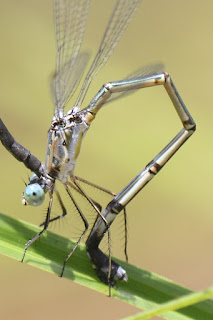 L. praemorsus, female (for comparison) from Nam Nao. Note the small dots on the thorax. 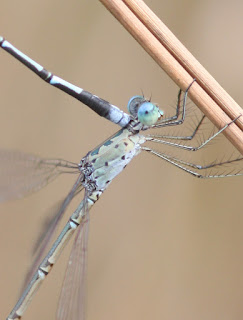 Here is a more recent copula from Phu Khieo where the males seem to be abundant (now I can separate them). 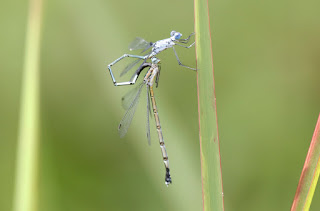 Many thanks to Noppadon Makbun for all his help on this confusing genus as well as Tom Kompier for the more than useful information on his blog.

Posted by Dennis Farrell at 8:22 AM