Whilst visiting Kaeng Krachan, I managed to spot a number of species I had come across before. I must admit that I was somewhat disappointed and ended up concentrating on butterflies. No idea why, but I could have been a few weeks early for the rarer species. That said, as I was about to cross one of the streams that cross the road, a Gomphid landed momentarily. I managed only a record shot before it, too, shot off. I researched it when I returned home and I was confident it was Asiagomphus xanthenatus xanthenatus, confirmed later by Noppadon Makbun. So I did get a new species after all, but it was a poor shot ... until the next time we meet! 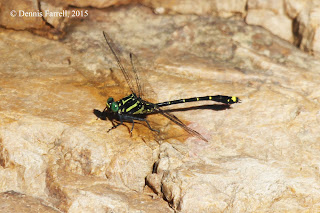