This trip really was a case of the good, the bad and the downright horrible! The day started well. I arrived at 6.00am and got in straight away. About 1kms from the entrance, I saw about a dozen birds walking around on the road. One of them was a Siamese Fireback and the others were Jungle Fowl. It was great to see and it increased my excitement for the day ahead. I couldn't wait to get up to the marshland at the top. I arrived and was greeted by several deer, staring at me as usual. The marsh was extremely quiet. I only managed to spot the usual suspects and failed to find my target species, Indolestes gracilis ssp., which I wanted to find and collect for ID purposes (as well as the female if possible). It turned out to be 'teneral day', with hundreds of shiny specimens flitting around as I walked. They must have emerged due to the rains from the previous week. After a couple of hours of searching, I thought it was time to move back down and head towards the river. I stopped at another pond, which my brother mentioned and it looks good for future trips, though it was just a flying visit this time. I continued and saw another path. "Hmmm ... what's up there?" I thought. Big mistake! I got about 100 metres along the path when I decided it was getting worse and worse with thick mud. I decided to turn and stopped at an area where it was possible to do an 8-million point turn. As I started, the wheels started to spin in the mud. It got worse and worse until I knew I wasn't going anywhere. I got out and tried to clear the mud. Nope. Wedged lots of twigs and sticks under the wheels. Nope. Walked back to the entrance with a bag and filled it up with small stones. No chance. I was stuck fast. Now full of mud and being attacked by hordes of leeches, I knew my only option was to walk back up to main area and try to stop somebody. Anybody! It was totally deserted. The poor weather had forced everyone to stay at home. I walked about a kilometre when an angel appeared. Actually, it was a young guy on a motorbike wearing a Man United shirt. I flagged him down and he took me to the ranger station. As if by magic, another guy appeared from nowhere, armed with rope. We jumped in his truck (with the United fan) and we returned to my truck. After numerous attempts (including his truck getting stuck), we eventually got it out. I gave them a reward for their fantastic help. Without them, I would still be there now I think. So, that was it. Straight to the river at the lower reaches. I searched for hours and hours, but only common species could be found. Thankfully, the sun decided to make a brief appearance and with it, so too did around 5-6 specimens of Burmagomphus divaricatus. I have seen this species at several different locations and it appears to be fairly common, in NE Thailand at least. Other than that, nothing showed, except for a female Gomphidia kruegeri donning masses of eggs on her abdomen, and a large Corduliid, which looked most certainly like Epophthalmia sp., though not sure which. I WILL have to remember my net next time. And that was it. I wandered around for a good few hours with nothing really to show for it. Until, that is, I decided to take a look in the gloomy darkened areas. I searched for a good while and was about to give up, when there above me in the gloom, something looked possibly like a resting dragonfly, though it could have been a stick. I had to take a number of pictures with the flash just to see what it was. Amazingly, it turned out to be a new species for me in the shape of Macromidia rapida, a species that has only ever been recorded once before in Thailand (at the same location, too, I believe). So, right at the death I was saved.

My best pictures of the day: 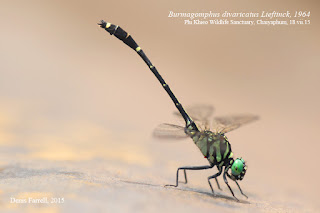 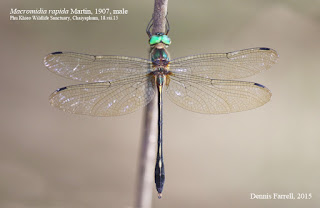 Certainly not my first sighting of G. krugeri, but certainly my first female ... check out those eggs! 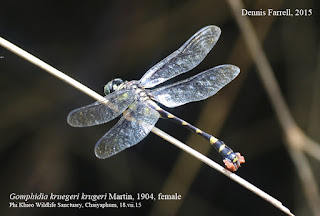 Who can resist taking photos of this species? 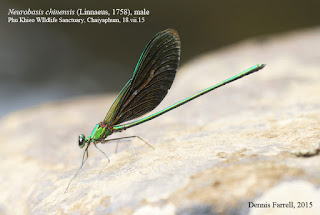 The marshland was awash with teneral specimens... 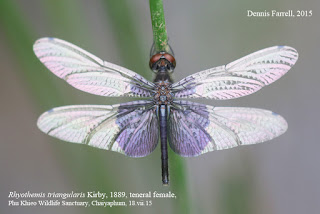 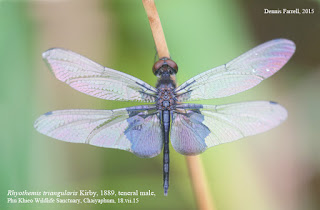 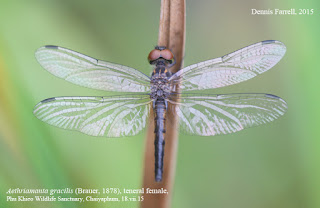 Not commonly seen ... a Brachydiplax farinosa teneral specimen with 7 antenodal crossveins on one wing and 8 on the other. Very strange. 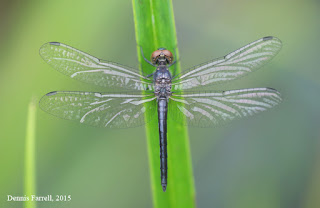