A decent trip to Phu Khieo Wildlife Sanctuary with my brother, Paul, left me with the biggest smile on my face. I had seen a number of dragonflies and a few butterflies whilst on a stakeout to spot the best locations for a longer trip next weekend (to be added). Suddenly at an almost featureless mud hole used by mammals to drink, there was a red dragonfly sitting there, hanging on to the weeds in what seemed like gale force winds. I crept towards it (actually getting stuck in the thick, gooey mud with my attempts) and I realised that it was yet another new species for my records. I managed to get several decent shots even though it was the windiest day in the world, ever! Doing a little research when I got home and it turns out to be Lyriothemis elegantissima (may not be true - see NOTE) - likely a new provincial record and a very rare species to boot. In fact, it is the first time I have seen a specimen from this genus. Amazingly, I even managed to find the female at another location there (I am 99% confident) and tried to photograph it. However, the wind got stronger and stronger and it literally blew the female off the grass and far away! I was gutted, but still happy that I have found the male. Until the next time, female!

NOTE: Since attempting to ID this species, I have come to realise that it may not be L. elegantissima after all. It could be a different species known to Thailand, or even a species yet to be described to science ... so, for safety reasons, I will change it to Lyriothemis sp. for now. Hopefully it can be resolved soon (though I will leave the names on the photos as I am too lazy to do it all again). 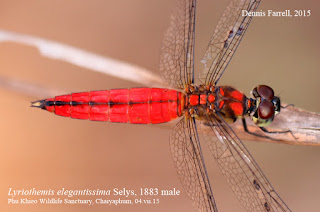 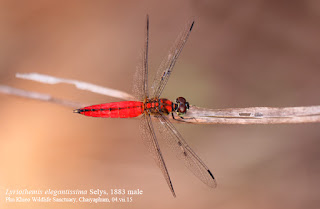 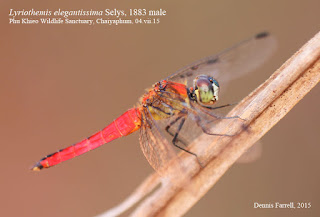