At the same pond (Road 2216, 8 kms south of Nam Nao town) that I saw I. carnatica, I saw a large dragonfly move rapidly along the margins. When it came close to me, I knew it was genus Anax, but it was moving too quickly to determine which species. I continued photographing and observing other species present and then I saw it again. This time, every time it appeared, lots of males from other species would attack it and it seemed to then disappear for good. Finally, just before I was ready to move on, the female of the same species appeared and rapidly flew from edge to edge of the pond ovipositing as it went (I have seen photos of the female lowering herself down a stem to oviposit). This female seemed to skim her caudal appendages along the surface of the water - unless she was cleaning off after ovipositing???. This was a more green/brown coloured female, with the same yellow/black abdomen as the male. To my surprise, when the female appeared near me, the male arrived and hovered almost motionless above her. I quickly got out my camera (I had just packed away), and hoped that they would come round again as this seemed to be the pattern. Eventually, the female appeared again and I was armed with my camera. I actually managed to get a few pretty good shots considering my camera equipment's limitations. The female, however, was just far too quick to photograph (I just kept getting photos of water).
When I returned home, I saw that there are five species in the Anax genus, known in Thailand. I already have good photos of A. immaculifrons, so it was a toss up between A. guttatus, A. indicus, A. nigrofasciatus and A. panybeus.


This species has now been identified by Oleg Kosterin as Anax indicus, and is a new provincial record!

The male...
The male is simply beautiful. Obviously, I only saw the male in flight, but I still think the photos are good enough for ID. For its size it was a very quiet flyer. The most noticeable thing was the blue dorsal patch on S1-2, which really stands out when it is in flight.

Note: it almost seems to fold in its caudal appendages during flight. These photos are uncropped, using a 300 mm Sigma lens. 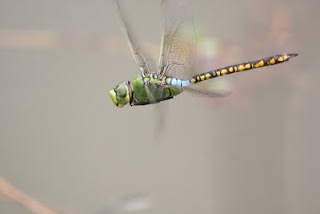 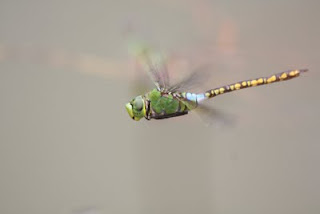 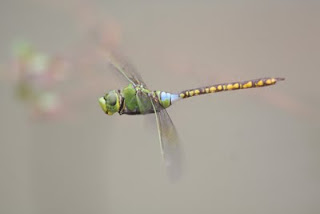 Many, many thanks to Oleg Kosterin for the ID and information regarding identification of the species. Also, thanks to Noppadon Makbun for his comments.
Posted by Dennis Farrell at 12:23 AM