Number: 130
Family: Coenagrionidae
Genus: Ceriagrion
Species: Ceriagrion azureum
Common Name(s): N/A
Thai name(s): แมลงปอเข็มสีพื้นผู้ฟ้าเมียเขียว, แมลงปอเข็มเซอร์สีฟ้าสด
Habitat: Exposed, but weedy areas of upland ponds / lakes
Province(s) sighted: Helicopter Pad Lake, Nam Nao National Park (Petchabun)
Sightings (by me): Very uncommon
In flight (that I have seen): June-July
My 9th species in the genus Ceriagrion! I returned to Nam Nao Helicopter Pad at National Park, in search of the female, Indolestes inflatus. I found it, as well as a copula (Indolestes inflatus). In addition, I was surprised to find another new species... Ceriagrion azureum.
It was an amazing thing to see. Well, basically, you couldn't miss it. As far away as possible from the entrance to the lake, was an area where the lake shallowed up and was heavily covered by trees. I had caught a male Brachydiplax and was photographing the genital plate for correct ID. Then I saw it. A bright blue stick moved across the shallow and very weedy area. You couldn't miss it. It was clearly Ceriagrion and the only thing that possibly matches is Ceriagrion azureum. It's actually very large for Ceriagrion and the colours are not Ceriagrion like, but it has to be the most beautiful one of all (maybe because I'm a Man City fan). I then searched the whole area for a few hours. I managed to see a second male, as well as a number of other species, but the thousands of leeches biting and heavy storm brewing, cut short my day.
Since then I have returned to the same place and was lucky to spot 4-5 males in a small area late on June afternoon - though I still didn't spot the female.

The male
It is easy to see why it is called C. azureum... it is basically completely azure blue. Only S9-10 and the caudal appendages are black. The stigma is black too and the wings are hyaline. It is larger than most Ceriagion too. 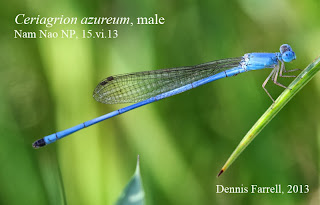 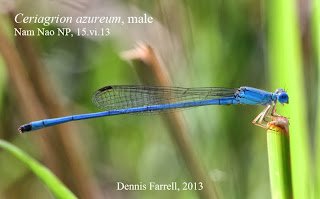 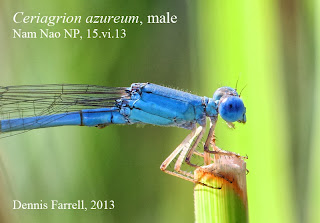 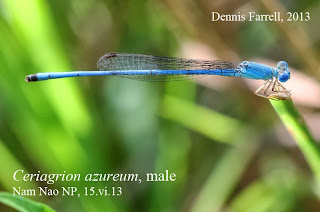 Here is the first ever male I saw, chomping away at a small leaf hopper, in the bright sunshine. Before he grabbed his lunch, it was difficult to get near. Once he tucked in, he didn't care that I was there. 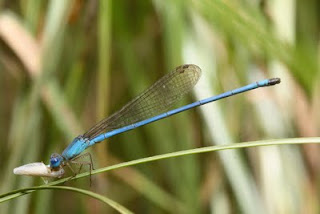 Once he had finished, I managed to pick him up easily. 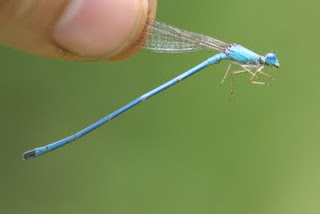 I didn't spot the female, but I will return soon and hopefully find her then.
Next trip: Khao Yai National Park again. In have unfinished dragonfly business there...
Posted by Dennis Farrell at 12:39 AM