Well, after a number of years of searching but having little knowledge of the species, I finally clapped eyes on it: Amphithemis curvistyla - a seemingly rare species indeed. I had searched every marshy area, pool and puddle, been ripped to shreds and bitten to death, but didn't find it at Phu Khieo where it had once been reported. Obviously a rare species full stop, but even rarer here. Finally, whilst looking at a more standard deep banked pond where I have spotted a few goodies previously, there he was - almost out of reach battling in the air with many T. aurora and not doing what it says on the tin. Though the pond has a boggy area to one side, it is deep and has seriously deep banking covered in thick, thorny foliage. I would never have thought that I would see it there. But, there he was, bold as brass. Sadly, even armed with a 400 mm lens, I only managed a record shot (heavily cropped) as it was just too far out of reach. I returned to the scene of the crime several times and was torn to shreds searching around the horrible banking, but I didn't see him or any of his friends again. Still, I know it is there now and will return next year (or go to Phu Kradueng where I believe it may be a little more commonly seen). Still, it was worth all the effort - he really is a beautiful thing. 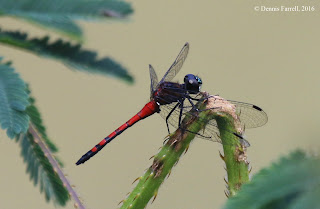 Posted by Dennis Farrell at 1:52 AM