At last! I have spotted a new species for the year. On a seriously dull and rainy day at the stream running through Nam Nao headquarters, I still managed to spot a shining light - in the shape of a large Gomphidae. This one, I am pretty confident it is Gomphidictinus perakensis, also known as Gomphidia perakensis. On first sight, I thought it was Ictinogomphus decoratus. However, I have never spotted this species at a heavily forested river before. I crept along the stream and closed in on him. I was sure that it was a new species, even though it is very similar. Once I returned home I searched www.asia-dragonfly.net and I am about 90% confident of my ID (should you know otherwise, please advise).  Its markings are slightly different, but only noticeable close up. The other giveaway for me, was the location. I was lucky enough to spot 2 males on the same day, perching on sparse tree branches over a very low-level and slow-moving stream.

The male
The male is large in size. Its caudal appendages are rather distinct and one thing I noticed - when you approached a specimen, it would start quivering its wings. When you got even nearer it would raise its abdomen. A little closer and it would fly away. And should you move away, he will often return to the same twig. This species is very similar to that of G. k. kruegeri (see entry), but whilst the 'boomerang-shaped' antehumeral stripe is solid on G. k. kruegeri, it is broken on the top of this species. 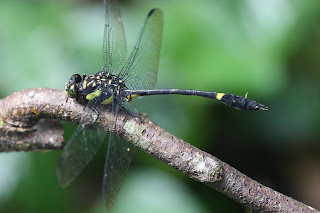 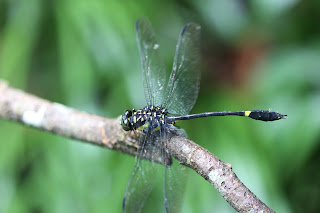 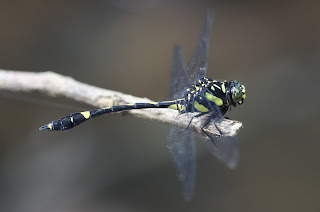 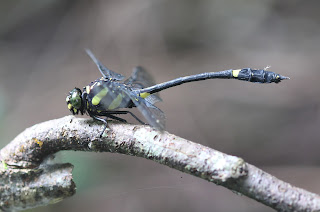 Here you can see how the antehumeral 'boomerang' stripes looks like it has been cut off. 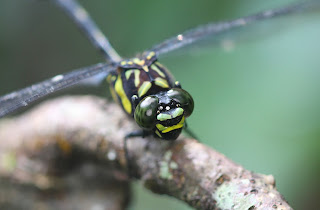 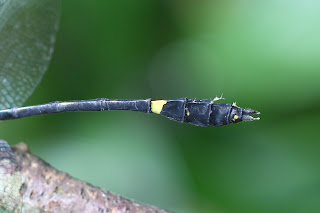 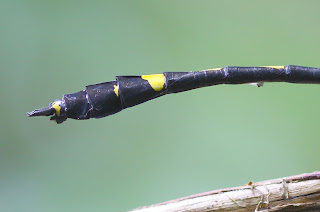 Hopefully, I will get to spot more males and a female on my next visit.
Posted by Dennis Farrell at 6:39 PM