Well, I had seen this species on numerous occasions... or so I thought. I have come across a number of similar-looking red Lyriothemis species. However, I recently saw the true form of Lyriothemis elegantissima. In fact, I think I only saw it because the more common Lyriothemis species (yet to be described) was absent. Maybe I have noticed it before but overlooked it! Similar to the others in many ways but it has heavy black markings on the thorax and on the end segments of the abdomen. The key, however, seems to be the genitalia. It is possible that the other two Lyriothemis species are, in fact, the same species but they are most certainly not L. elegantissima! It seems to prefer heaily tree-lined swampy areas. Though I only managed to get records shots of it, I know it resides at Phu Khieo now and will most certainly return in better weather next year and hope to get improvement shots These were taken from a good distance in gloomy conditions with a 400mm lens so I am actually quite happy with them! 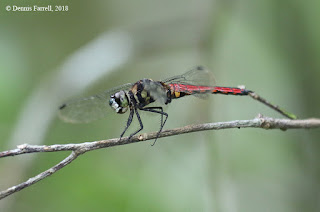 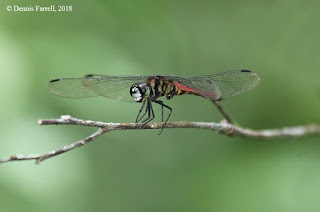 Posted by Dennis Farrell at 6:18 AM