Habitat: Deep in the forested area, near an uplands river.
Province(s) sighted: Song Khon Waterfall, Phu Rua environs (Loei)
Sightings (by me): Rare
In flight (that I have seen): September (though must be longer)

It was a weekend of agony and ecstasy at Phu Rua National Park and environs. Heavy rain, heavy mist, bad judgement on locations and a lot of driving, nearly put paid to my weekend trip.

After a sleepless night, I set off from Khon Kaen at 1am and arrived in Phu Rua at around 5.30 am with a few stops here and there. After a few bad choices on ponds (maybe it was too early in the morning), I tried my luck at the national park. Closed. Upon asking a man with a dog, who said "It's closed in the rainy season", I drove to another waterfall called Namtok Pla Ba, not too far away. It was part of an enormous river and the water was belting through at an unbelievable pace. The waterfall was low down and inaccessible, as too was most of the river. Back on the road. I saw a small waterfall called Song Khon Waterfall close by and chanced my arm. It was a stream. Good. It was in good forested area and I started searching. My last 3 trips proved fruitless, in terms of new species. After 6 hours of searching, this too seemed to be the same with only common species showing. I did see a female Gomphidae, but as quickly as it appeared, it disappeared. I searched for another specimen, but it was all in vain. Right at the exit of the trail, I noticed a large Aeschnidae move under heavy tree canopy. I edged forward and managed to get a few good photos. It turns out that it IS a new species... Gynacantha phaeomeria. A rare specimen indeed and a new provincial record (I think). So everything is good in the world, once more!


Juvenile male
This is a juvenile male, which will have more vibrant blues/greens when it matures. The most noticeable thing is the prominent white part of the caudal appendages (not sure of the the technical name for it). 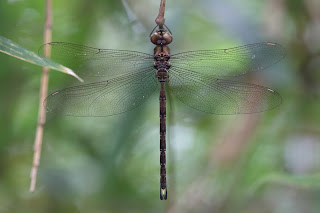 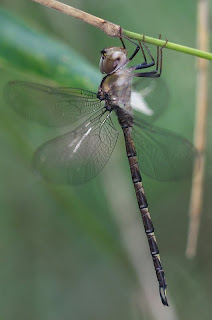 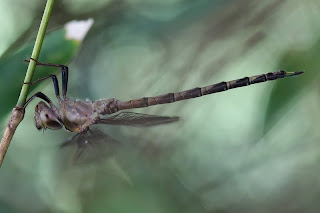 Many, many thanks to Noppadon Makbun and Mapor for the ID and useful information/papers on the species. Your help is vital in my identification as I am useless!

So, all-in-all, it turned out to be a good trip. Next trip... Chayaphum, Nam Nao then Tak (hopefully).

Posted by Dennis Farrell at 7:07 PM