After spotting a new provincial record earlier that day, I arrived at Phu Rua NP. It was too late in the day to look at the river then, so I had to wait until morning.

A was up at 5 am, coffee, cigarette, some noodles and I was off... I walked down to the river (there are two ways to get there and I took the slippery route, of course). I had to cross a tiny stream that I could hardly see because of seriously heavy mist. Just before the stream, I noticed a male Coeliccia poungyi. Then I looked up and saw a NEW SPECIES right in front of me, sitting in the trees (It was full of dew from the mist). Anyway, I saw this species and then saw many more specimens throughout the day. It turns out to be Noguchiphaea yoshikoae, a species previously recorded only in Chiang Mai and Vietnam, so a new species for me and another provincial record! Two provincial records in one trip AND I saw both male and female!

The mature male
It looks very similar to Vestalis smaragdina, but there are a few differences. It is smaller, has protrusions dorsally on the synthorax and the genitalia is more complex (it has a kind of brownish hook - you can see it if you look closely). Also, the white dorsal patch is solid from S8-10, whereas V. smaragdina it only covers part of S8 (from what I can tell anyway). They also seem less skittish than V. smaragdina. 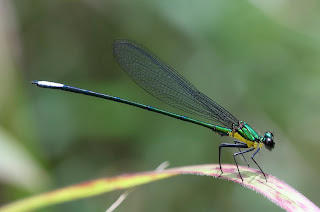 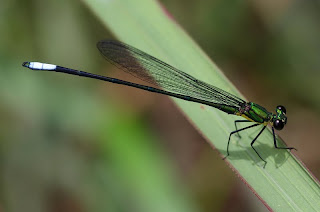 I spotted several perching high up in this position... looking down on a stupid fat foreigner taking photos of their friends. 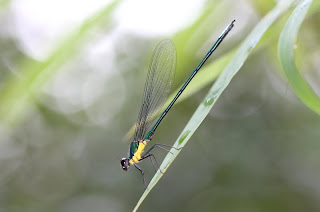 In the hand...
This gives an idea of size. This I managed to catch with my fingers. 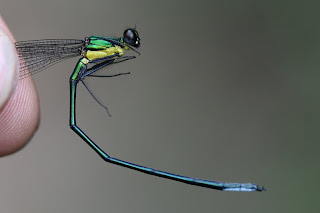 Here is the genitalia (notice the brownish 'hook') 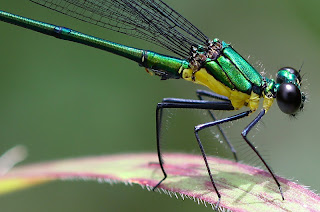 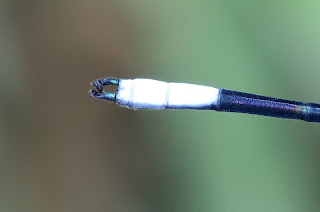 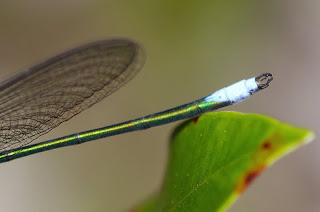 The sub-adult male
The male is the same as the adult, but the dorsal patch on S8-10 and the caudal appendages are grey, not white. 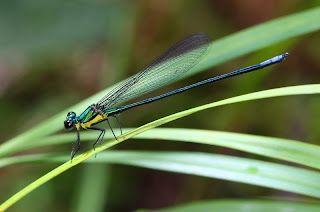 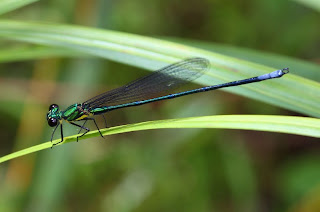 Here's the first specimen I saw at about 6 a.m., which had a lot of early morning dew from the mist. 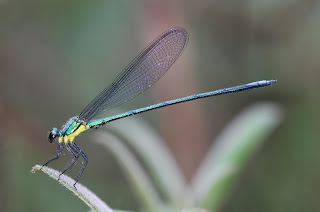 The teneral male...
I also briefly saw a teneral male, which had clearly only just taken to flight. The bugger still managed to fly high up into the trees before I managed to get really good photos though. Still, this one is OK. 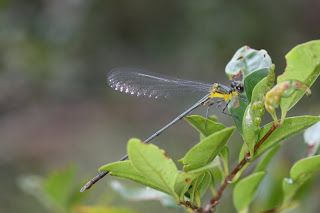 The female
I was also lucky enough to spot the female. At this stream/waterfall, the females were fairly abundant. They are almost identical to the male, but slightly more robust. Also, the protrusions (like little horns) on the synthorax are far more apparent. 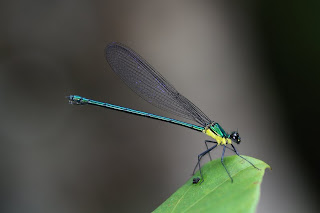 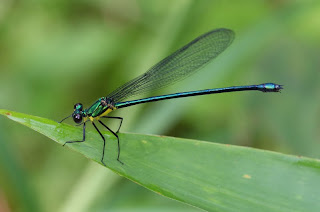 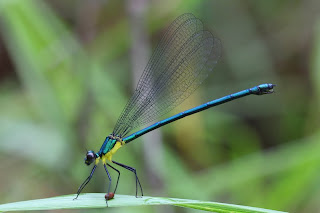 In the hand...
I also caught this female with my fingers. She flew away safely afterwards. 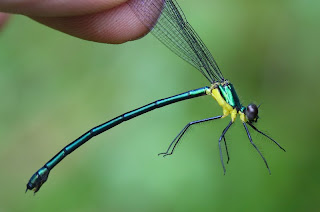 Many, many thanks once again to Noppadon Makbun for confirmation of ID and for providing lots of useful information on the species.
Posted by Dennis Farrell at 3:02 AM