Number: 159
Family: Gomphidae
Genus: Stylogomphus
Species: Stylogomphus sp. (unknown species)
Common name(s): N/A
Synonyms: N/A
Habitat: Uplands stream
Province(s) sighted: Nr. Sum Bon Ranger Station, Nam Nao National Park (Petchabun)
Sightings (by me): Extremely Rare
In flight (that I have seen): June (2013)
Species easily confused with: ALL small Gomphidae species (unless you can see the appendages)
Upon my return to Nam Nao National Park for the first time in 5 months, I didn't really expect to find too many new records for me. However, being the eternal optimist, I always think I'm going to find 100 new species on every trip - until I get there. This time, however, everywhere just seemed alive with dragonflies. I had to search through the common species and butterflies to try and find something new. At a tiny stream near the Ranger Station in the National Park (entrance near the Helicopter Pad lake), I thought I'd have a final look before heading home. I climbed down the steep banking and instantly I saw a teneral Gomphidae hiding deep in the grasses. I managed to get a few half-decent photos in, but as I tried to carefully clear some of the grass to get a better shot of the anal appendages, he flew up, high into the tree canopies. Still, it has been ID'd by the guys on Dragonflies of Thailand (Facebook Group) as Stylogomphus sp., though the exact species is unknown. It may even be undescribed. Noppadon Makbun said that it looked similar to those found in Western and Northen Thailand. Hopefully, one day, I'll find out for sure.

Since then, I have found another Stylogomphus species at Kaeng Krachan, which can be found here. 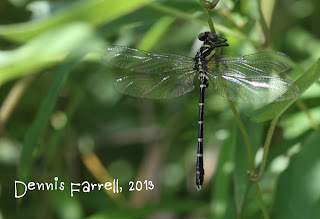 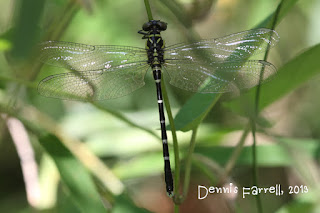 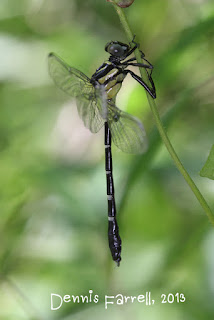 Here's the best I could do with showing the appendages (rubbish, I know). They do show the whitish protrusion pointing outwards from the caudal appendages. It looks like the stylus from an old record player ... probably where it gets its name. 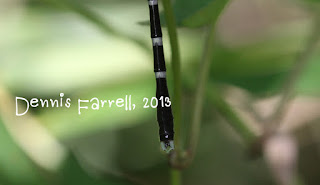 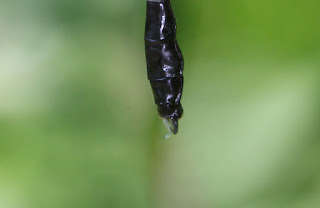 Posted by Dennis Farrell at 5:53 AM