Another species I saw alongside Indothemis limbata limbata, was Tramea transmarina euryale. There were 4-5 males constantly patrolling the edges of the pond. I watched them for about 30 minutes and almost gave up on waiting for one land to take photos. However, my luck was in and a male landed in the bushes behind me, just while there was enough light left. Once it had landed, it wasn't easily frightened and both photos below are uncropped, using a 300 mm lens.

The male
It's similar in size and shape (including the long legs) of Trithemis pallidinervis. The thorax is brown and the abdomen is a strong red, with prominent dorsal marks on S8-9. The caudal appendages are black and very long. There is also red colouration to the base of the wings. 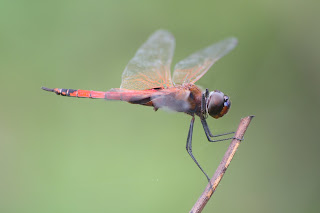 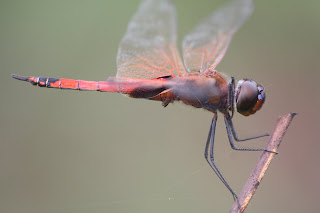