At the end of a long and fruitful day at Pa La-U waterfall, I made my way back down to the first level, acutely aware that a storm was brewing slightly higher up the mountain. Just as I was about to put my camera back into my camerabag, I noticed an extremely long Platystictidae perching on a tree trunk. I knew it was a new species for me, but couldn't tell in the bad lighting whether it was in the genus Drepanosticta or Protosticta. I managed a few poor shots and then a group of tourists walked past and the thing flew away. I searched for a while and then remembered the male Drepanosticta jurzitzai which I had spotted a few weeks earlier. I simply stood back and waited. And waited. And then ... amazingly, he returned to the exact same spot. This time I managed to get a few better shots and with the storm rapidly approaching, I caught the specimen with my fingers. By now I knew it was Drepanosticta sp. and thought it was possibly D. sharpi. I managed a few shots in the hand and while preparing to get shots of the abdomen, I slipped and released it by mistake. It flew straight up and out of sight. I still thought I had enough shots for ID. However, upon my return, I posted my photos on "Dragonflies of Thailand" on Facebook and Noppadon Makbun informed me that there are a number of species in the genus yet to be described. This is likely to be one of them. So ... like many specimens spotted on this trip, I cannot conclude the exact species. It will for now be Drepanosticta sp.

The male.
The male is, like many species in the genus, dull in colouration with a bright patch on the abdomen. This specimen, however, had an abdomen that seemed to go on forever. The other notable thing, is that the thorax has a dull but noticeable green metallic sheen dorsally. 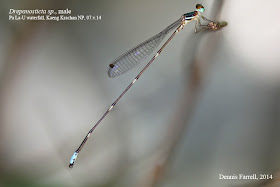 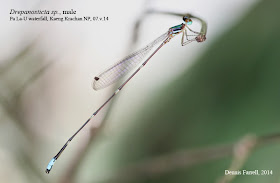 Now in the hand (notice that stunning metallic green sheen): 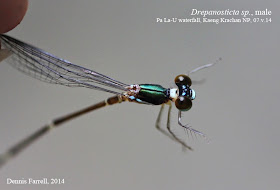 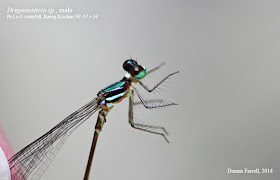 Not a great photo (light had almost gone), but gives an idea of size (and my hideous fingernails): 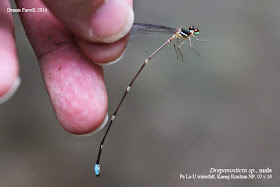 My best attempt at photographing the appendages, before it escaped: 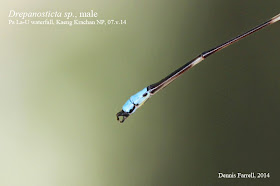 Thanks to everyone with their help on trying to ID this specimen, especially to Noppadon Makbun.
Dennis Farrell at 1:19 AM
Share