Number: 166
Family:   Libellulidae
Genus: Onychothemis
Species: Onychothemis culminicola Förster, 1904
Common name(s):N/A
Synonyms: N/A
Habitat: Forested sandy stream
Province(s) sighted: Pa La-U Waterfall (Pratchup Khirikhan)
Sightings (by me): Solitary male
In flight (that I have seen): May (2014)
Species easily confused with: N/A
At last, I have spotted a new member of the Libellulidae family. It is well over a year since I spotted my last new record species from the family. This time, it is in the shape of Onychothemis culminicola, a beautiful and bold species, easily recognised by its bright red abdomen and brown thorax boasting strong yellowish stripes. I have spotted its relative, O. testacea testacea, on several occasions and they were also clearly the dominant species at a very shallow and sandy stream situated just below Pa La-U waterfall. I was actually there to try and locate Nihonogomphus pulcherrimus, which I was guided to by Pattarawich Dawwrueng. Amazingly, I did see a solitary male. However, it was unable to land as it was attacked by numerous  O. testacea every time it arrived at the water's edge. It was obviously spooked by them and just flew around before finally flying up high into the treetops. I was annoyed that I didn't photograph it, but happy at the same time as I managed to see it for the first time. I moved on along the stream and then I saw it. A solitary male O. culminicola hanging on to a branch on the opposite side of the stream (also constantly bombarded by O. testacea). It was extremely skittish and took me almost an hour to get the shots I have. I am extremely pleased and, according to Kroolek Reinthong - a fellow odonologist - it is a provincial record. Obviously it is scarce there. I couldn't find any other specimens during my visit.
The male
The male is easy to ID with its bold red abdomen and strong markings on the thorax. However, should you see one, approach with caution. They fly away at the slightest movement (but often return if you retreat). 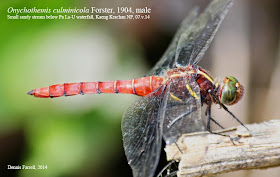 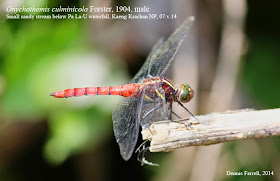 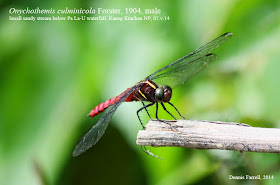 Many thanks to Pattarawich Dawwrueng for letting me know about this location.
Dennis Farrell at 8:27 AM
Share